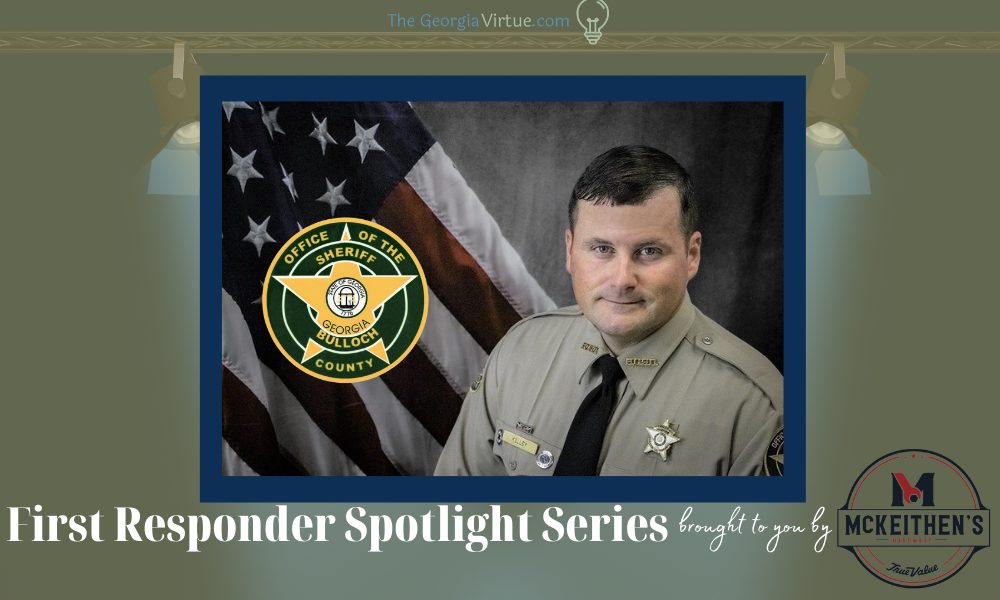 Deputy Rhett Kelley hasn’t always worked in law enforcement. As a Florida native, he landed in southeast Georgia after a transfer with Walmart, where he worked in logistics as well as management in Vidalia. Cultivating a small family farm and working for himself on the side, Kelley made the move to become a licensed EMT intermediate. He and Diana, his wife of 25 years, reside in Emanuel County where she homeschools their six children.

During his tenure, he worked for Johnson County, Emanuel County, and then Candler County EMS, where he was working when a position opened up at the Candler County Sheriff’s Office. At the age of 39, Kelley took the opportunity to move into law enforcement, went to GPSTC to become a Certified Peace Officer, and hit the road as a patrol deputy. He worked in Candler County for two years before he moved to Bulloch County in December 2018.

But how does one find themselves on such a career trajectory? “Before I got into law enforcement, watching the news and media, there were sometimes things that I wasn’t so sure were right. My thought was instead of sitting on the sidelines finding things to be critical about, why not do the job and try to do it right and do it well.” Of course, it didn’t hurt that he had the support and encouragement of his wife and family.

Bulloch and Candler have a number of stark contrasts, particularly with population and available resources. “I wasn’t used to working with so many others on a shift,” Kelley said. “Obviously that is helpful though, with the large call volume, the bigger county, and so on.”

Kelley joked that while working for Walmart, he routinely had to deescalate situations, which helped prepare him for the job he does now, but more appropriately, he said the daily interactions merely taught him how to talk with people from all walks of life. The company once followed the mantra that you must ‘Respect the Individual, Service to the Customer, Strive for Excellence.’ “That isn’t all that different from what we do in this job on the road. Most people just want you to talk to them like you understand what they’re dealing with. They don’t call us on their best days and it’s important to remember that.”

His EMT training hasn’t been left by the wayside, either. Of course, the introduction to public safety and service was helpful, but Kelley was also given the opportunity to try out for the Sheriff’s Emergency Response Team early on, in part due to their need for a medic. He’s a member of that team in a dual role as both a medic and an operator.  He’s also been able to render aid to a number of individuals in the course of his duties, including most recently following a pursuit of a vehicle that fled from deputies and wrecked. That, in itself, is rewarding for Kelley.

The tough days come where there’s a situation where it’s difficult to create a great outcome for anyone. “The days when you want to go home and hug your kids a little tighter, those are rough days,” he shared.

But with any job that is beloved, the good outweighs the bad, which is just another small part of why he loves working in law enforcement. The unexpected changes each day, the people he works with, and the opportunity to help people solve problems is a challenge he excitedly takes on every time he heads to work. He spoke of a call where he had the opportunity to talk with a teen who was headed down the wrong path.

“I sometimes give what I call my ‘dad talk’ and I try to explain things to them, give them a little perspective. Sometimes it goes in one ear and out the other, and sometimes it really resonates with them. I’ve had a parent who will see me in town somewhere and approach me to tell me that the conversation straightened up their son or daughter and they’re doing much better. That’s one of those things that sticks with me and it makes it worth it.”

A number of people have helped and mentored him along the way, but Kelley credits Lieutenant Kirk Mcglamery for setting an outstanding example for not just Kelley, but others in the Bulloch County Sheriff’s Office.

“His work ethic – he leads from the front, he doesn’t ask you to do anything he wouldn’t do himself, he is a real go-getter and with nearly four decades of experience in law enforcement and his rank, he could take a step back and supervise, but he doesn’t. He’s elbow to elbow with us and I really admire him for that, in addition to the way he cares about the people who work for him.”

As far as advice goes for those considering a career in law enforcement, Kelley said the most important thing for people to remember is that they should treat others how they want to be treated. “Give them a fair shot,” he said.