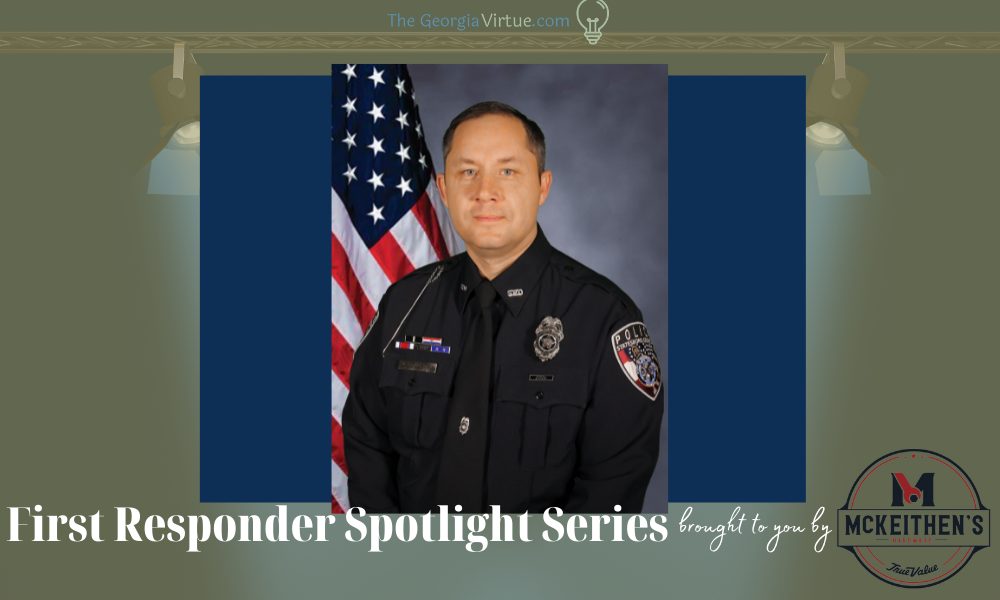 Detective Keith Holloway is Bulloch County native and a twenty year veteran of the Statesboro Police Department. He is a first generation first responder, though his brother, Jamey Holloway, is a Trooper with the Georgia State Patrol.

Keith Holloway started his career in law enforcement not long after he graduated from Abraham Baldwin Agricultural College (ABAC) in Tifton with a degree in criminal justice studies. As an avid outdoorsman, Holloway thought he wanted to be a Game Warden with the Georgia Department of Natural Resources. He applied at a few places, including with the Statesboro Police Department to work as the Animal Control Officer. The Chief at the time, Richard Malone, said there wasn’t a spot for him there, but Major Stan York said he could offer him a position on patrol if he was interested. Holloway said after some thought, he decided that’s where he had an interest in working anyway. At the time, though, he said he never wanted to go into investigations.

He was promoted to Corporal in 2006 and worked on patrol until 2007 when he was transferred to the Detective Division, or Criminal Investigations. At first, the change from patrol, where you start something new every day, to investigations, where you’re continually building on what you did the day prior and managing a dozen or more cases at a time, was rather significant. “It’s definitely a job where you feel like you never get caught up,” Holloway said.

His role has evolved after 14 years in CID as he now manages the evidence room and works as the Crime Scene Tech at all the major crime scenes – murders, rapes, and the like. That’s a position he took on officially in 2015. It’s accompanied by a unique certification comprised of a number of courses, such as photography, crime scene investigations, and courtroom testimony, spanning across 200 hours. He’s on call 24/7, though the agency does have a back-up on-call Crime Scene Tech for those rare times Holloway is on vacation or out of town.

Holloway is called out to the more serious crime scenes to analyze and collect evidence. He’s charged with determining to the best of his ability what evidence on the scene will be important and necessary to connect dots later on. From there, he is bestowed with the responsibility of maintaining a chain of custody for all of the evidence and ensuring it gets to the appropriate crime lab. He maintains the evidence until trial, and for a period after, and testifies in court proceedings to the practices of collecting evidence.

Those practices, however, have changed substantially since he started in law enforcement. “Years ago, you didn’t worry about touch DNA. You could handle stuff, as long as it didn’t have blood on it, and now, every time you process something, anything, you change your gloves, put new gloves on, put it in the bag, and consider it may have DNA on it.”

But the advancement of technology and his career have not come without the mentoring and influence of a number of folks in the agency. Holloway said there have been plenty, but particularly Captain James Winskey, who was the Crime Scene Tech when he was hired. He also mentioned advice he was given from Scott Brunson, who was his Captain in CID for a period of time. “People would get in a hurry and want to do stuff quickly and he would always say – to everyone – CALM DOWN! And it’s some of the best advice I received. I can hear him saying it, too. Calm down and take your time, do it right.”

Of course any case that has not yet been solved is one that remains on his radar with a desire to close it out, but one that has lingered in his mind involved a female who was shot at The Exchange. “The girl was shot in the back by her boyfriend and then he committed suicide. And she was just 17-years-old. Seeing her down there, knowing she was young and innocent, I always think about that. It’s always just stuck with me,” he said.

“And I do have the open Platinum Lounge murder from 2012 – Akeila Martin. That bothers me that I can’t solve that one. I was the primary detective on that case and I just want to be able to provide answers for the family,” Holloway said.

But with 20 years with the agency, Holloway does have a number of accolades, too. Earlier this year, Holloway was awarded ‘Detective of the Year’ within the Statesboro Police Department, an accolade awarded by nomination and selection by his peers. He also received an award in Expert Shooting for 2020 and a Meritorious Service Award.

Holloway is happy where he’s at working with Statesboro PD and though the community has grown exponentially since he started, Holloway says he’s blessed to work in the community that he does.

With regard to the Akeila Martin case, a reward is being offered for information leading to the arrest and conviction of the offender. Anyone with information related to Martin’s murder is asked to contact Statesboro Police Det. Keith Holloway at 912-764-9911. Information can also be submitted anonymously to tips@statesboroga.gov.