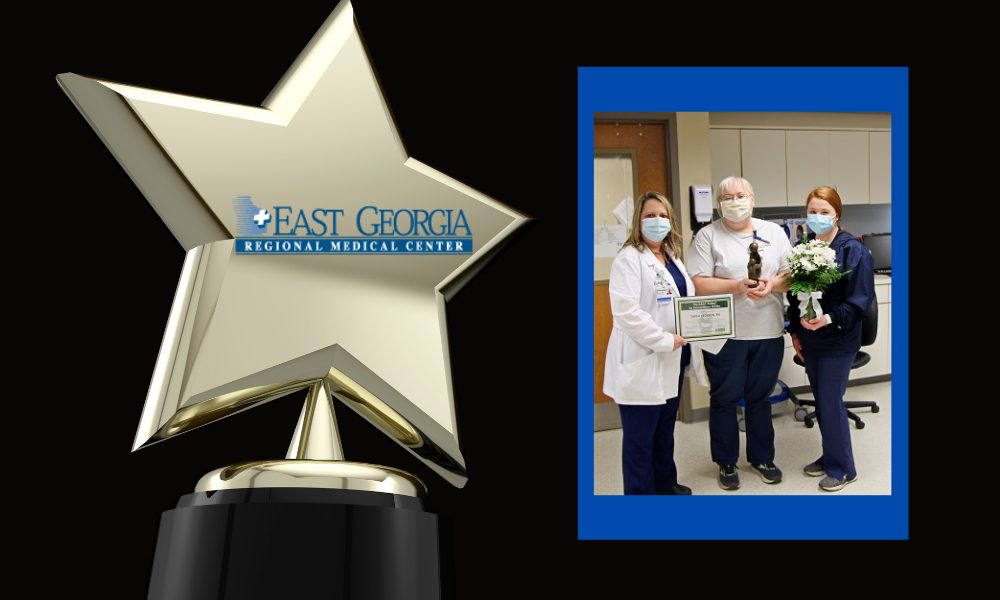 Sheila received multiple nominations for this award, and below are some excerpts of the kind words that were written about her:

“I don’t know of another nurse, or human for that matter, that is more compassionate than Sheila. She is the epitome of grace and calm under pressure. Sheila is such a team player, and never refuses to help even when she has several things going on herself. Everyone should aspire to be more like Sheila.”

“Mrs. Sheila is exactly the nurse I want to be. She puts her patients and coworkers first, and remains calm and level-headed in all situations. Sheila is willing to help and teach, as she is extremely knowledgeable. She always goes the extra mile for her patients. Sheila is just an amazing, caring, smart, and compassionate nurse. You won’t find anyone better.”

“Mrs. Sheila has taught all of us something. She takes the time to teach and explain, and makes me feel safe. Every person I know loves her, admires her, and respects her. There isn’t anyone more deserving of recognition.”

“Have you ever had that one person you always look forward to working with…your calm in the middle of the storm? That is Mrs. Sheila. She is the ‘mom’ of CCU.”

“Sheila epitomizes compassion in dealing with developing nurses and families during their most stressful and needful times. She is an excellent communicator, wholly beloved by peers and patients. Sheila is selfless in sharing her expertise with new staff. ‘WWSD’ – What would Sheila do – is a credo to excel both personally and professionally.”

Nurses may be nominated for the DAISY Award by patients, family members, and colleagues. The award recipient is chosen by a committee at EGRMC, upon review of all nominations. Each Honoree receives a certificate commending her or him as an “Extraordinary Nurse.” The certificate reads: “In deep appreciation of all you do, who you are, and the incredibly meaningful difference you make in the lives of so many people.” Honorees also receive a DAISY Award pin, bouquet of daisies, a banner to hang in their respective department, fresh baked cinnamon rolls for their team, and a beautiful and meaningful sculpture called ‘A Healer’s Touch’, hand-carved by artists of the Shona Tribe in Zimbabwe.

“We are proud to be among the hospital systems participating in The DAISY Award program,” said Stephen Pennington, CEO of East Georgia Regional Medical Center. “Nurses are heroes every day. It’s important that our nurses know their work is highly valued, and The DAISY Foundation provides another way for us to do that.”

The DAISY Foundation is a not-for-profit organization, established in memory of J. Patrick Barnes, by members of his family. Patrick died at the age of 33 in late 1999 from complications of Idiopathic Thrombocytopenic Purpura (ITP), a little known but not uncommon auto-immune disease. (DAISY is an acronym for Diseases Attacking the Immune System.) The care Patrick and his family received from nurses while he was ill inspired this unique means of thanking nurses for making a profound difference in the lives of their patients and patient families. Said Bonnie Barnes, FAAN, President and Co-Founder of The DAISY Foundation, “When Patrick was critically ill, our family experienced first-hand the remarkable skill and care nurses provide patients every day and night. Yet these unsung heroes are seldom recognized for the super-human, extraordinary, compassionate work they do. The kind of work the nurses at East Georgia Regional Medical Center are called on to do every day epitomizes the purpose of The DAISY Award.”

“I am happy to see Sheila honored with such a prestigious award as the DAISY Award,” said Marie Burdett, MSN, RN, Chief Nursing Officer at East Georgia Regional Medical Center. “Sheila is not only a mentor for many nurses here at our medical center, but the genuine compassionate care that she gives her patients and their families is remarkable. She is an extraordinary nurse, and very deserving of this recognition.”

To learn more about the DAISY Award, or to nominate a nurse for this prestigious award, visit www.eastgeorgiaregional.com/daisy-award-nominations.