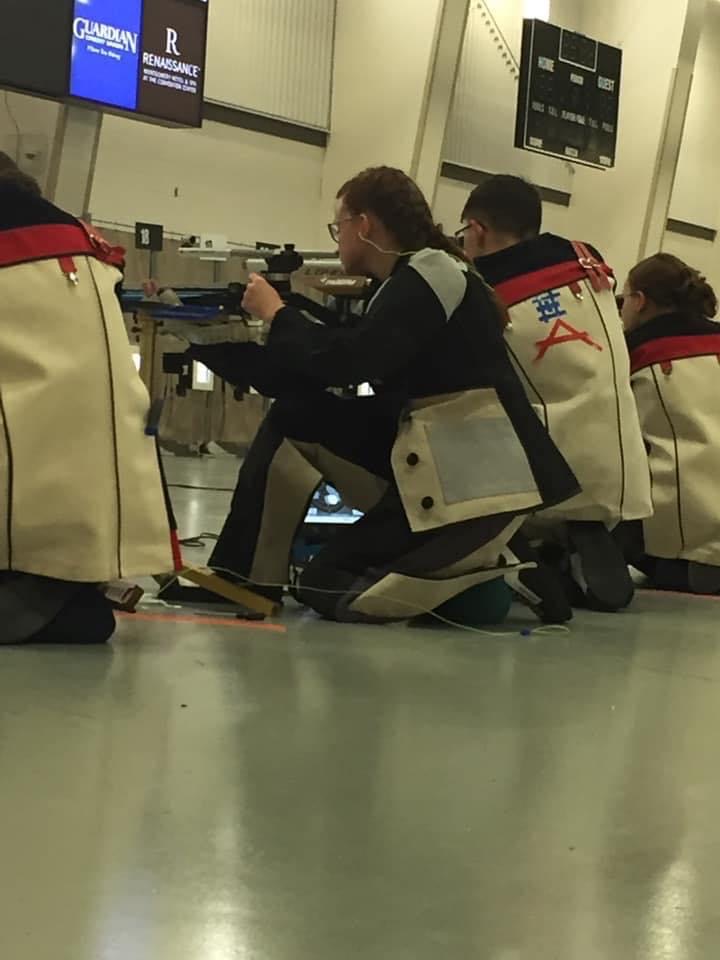 “This is an extremely competitive sport, and at this level it is almost unheard of to have a high school freshman qualify,” said Lt. Colonel (Ret) Eric Heffner, Statesboro High School’s Precision Air Rifle Team coach.

Katlyn Sullivan and her family will travel to Hillsdale, Michigan, for the competition which is scheduled for May 11-15, at the Margot V. Biermann Center on the campus of Hillsdale College. During the event, she and other competitors will spend the first day training and being oriented to the competition, then Thursday through Saturday then will competitively shoot 60 shots per day in qualification rounds, and Sunday will be the finals for both the men and women who qualified to advance. To compete is quite an honor, as some of the finest athletes in the nation will attend.

Katlyn, 15, is the daughter of James and Kathleen Sullivan of Statesboro. She qualified for this invitation-only slot to compete after participating in a Georgia USA Shooting event at the Ole Mill Range Complex in Griffin, Georgia. She along with other high school and college air rifle athletes from all over the state met in an attempt to post high enough scores to move them one step closer to their dreams of either being future Olympians or to secure collegiate riflery scholarships or positions on college-level teams.

Katlyn’s grandfather, John Sullivan, who is a former Marine, was the first to begin teaching his granddaughter how to properly handle firearms, and she frequently accompanied him hunting. She showed a natural interest in shooting, and her parents began enrolling her in various summer camps at the Georgia Southern Shooting Sports Education Center (SSEC) in Statesboro. Her father, James, recalls that when they took Katlyn to watch her first GA Southern Women’s Rifle competition at the SSEC, it was then she expressed a sincere desire to take up the sport. Ashley MacAllister, the assistant director of the SSEC, is Katlyn’s primary private Air Rifle Coach in addition to her high school coach, Lt. Colonel (Ret) Eric Heffner.

Statesboro High School’s counselors, administrators and teachers have worked with Katlyn and her family to accommodate this opportunity as the USA Shooting event is during a time when high school students are taking national Advanced Placement tests, state End-of-Course tests, and other final exams as they prepare to end the school year.

“It is only through the cooperation of organizations such as yours that we are able to allow these athletes to truly experience this level of competition,” Breanne Orey, Manager of Competitions & Membership for USA Shooting, said in a letter to Statesboro High School and district administrators asking for support of Katlyn to attend the competition this week. “Standing shoulder to shoulder with the best shooters from across the United States and internationally makes this match one of the most competitive events that they will participate in” Orey further stated in her letter.

Katlyn is a member of Statesboro High School’s Precision Air Rifle Team, and she receives high praise from its coach, Lt. Colonel (Ret) Eric Heffner, who is also a Junior Reserve Officer Training Corp (JROTC) instructor for the school. With Riflery being a Georgia High School Association (GHSA) sport, many JROTC instructors serve as coaches due to their military training. In fact the GHSA Riflery State Championship was recently held in Statesboro on April 22-23, at the Georgia Southern Shooting Sports Education Center.

“The maximum score an athlete can score in Precision Air Riflery is 300 points, and in order to qualify for the State GHSA Championships an athlete has to score at least 292 points. Katlyn’s highest score is 290 which is unbelievable for a beginning freshman who only started shooting competitively in June.”

Air Riflery began at Statesboro High in 1982 when the JROTC Department was formed, and it was originally part of the ROTC’s Raider competitions. When it became a sanctioned GHSA sport, SHS formed an athletic team. Athletes compete by shooting in three positions: prone, standing, and kneeling. Lt. Col. Heffner works closely with Katlyn’s primary private coach, Ashley MacAllister, to help foster the teenager’s talent.

Formed in 1995, USA Shooting is the National Governing Body for international shooting sports in the United States. It oversees the Olympic Shooting Center and the Olympic Shooting Park at the U.S. Olympic Training Center in Colorado Springs, which serves as the primary training site and headquarters for the United States’s National Team, National Development Team and the coach staff and full-time staff that manage our nation’s participation in international shooting sports like the Olympics.