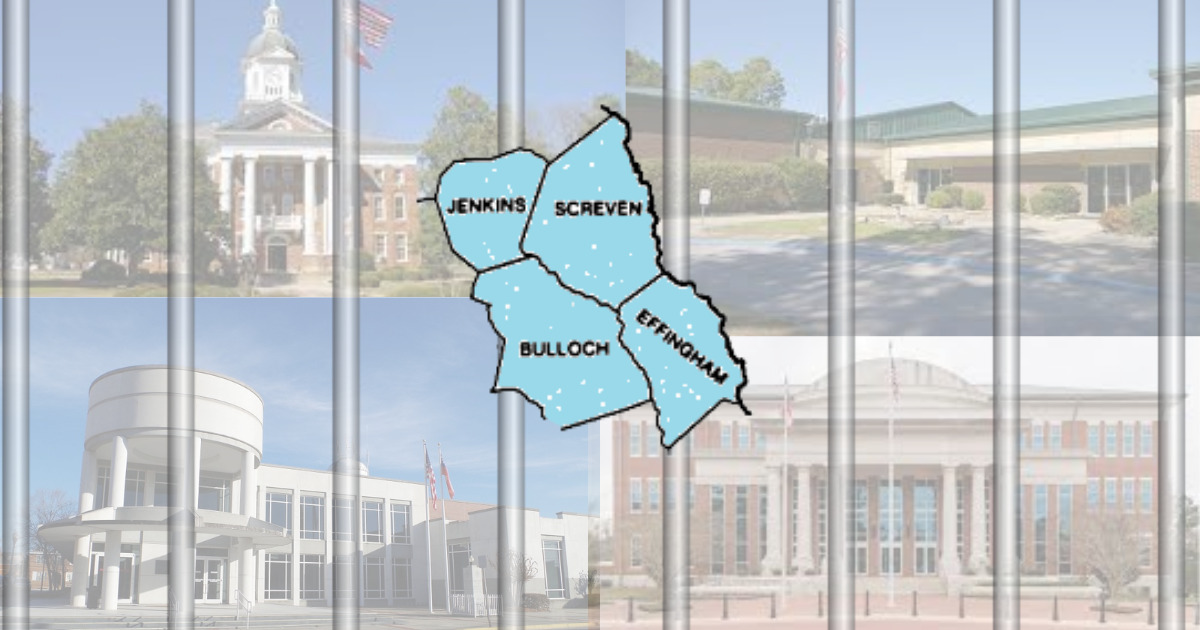 The way the Ogeechee Judicial Circuit handles bond for persons accused of crimes has long been denounced by lawyers and defendants alike, but those perspectives aren’t the ones considered when crafting policies and procedures.

Bond is a controversial subject with varying perspectives across the continuum of those who practice law. It’s even more controversial for those in the general public who either fear release of those charged with crimes or suffer in the absence of the same. Much to the chagrin of bond opponents, arrested individuals charged with a crime are legally innocent under the law unless and until proven otherwise. Their rights aren’t supposed to be limited at that point. Jail is supposed to be reserved for the most dangerous and repeat offenders.

In the Ogeechee Judicial Circuit, home to Bulloch, Effingham, Jenkins, and Screven counties, the opposite is the norm while the law and its intent remain the outliers.

How Bond Works Under Georgia Law

Under Georgia law, arrested individuals have a few ways to be released while awaiting resolution or trial.

Some offenses, such as DUI, Criminal Trespass, and other misdemeanors are set by a schedule which allows the Sheriff to release individuals in accordance with that schedule once an individual posts bail. (See OCGA 17-6-1(f)(1))

Other more serious offenses, like Murder, Aggravated Child Molestation, Kidnapping, and the like can only be set by a Superior Court Judge.

Everything in between may be set by a magistrate judge. In those instances, a person is entitled to appear before a Magistrate Judge, for the purposes of hearing the nature of the charges and advisement of basic rights, within 48 hours of an arrest.

…With the exception of Bulloch County.

There, a standing order from superior court exists in which a directive states that the elected magistrate judges are not to set a felony bond for any individuals at all. That means that magistrate court convenes multiple times per week for bond hearings that are only procedural in nature. A request for bond will be denied regardless of circumstance and the signature to bind the case over to superior court by the Bulloch County magistrate merely extends the length of the process. It also effectively provides time for the state to prepare for an argument against pretrial release.

Subsequently, the last ditch effort for a bond involves getting the prosecutor to consent to such and placing the order in front of a judge for signature.

Bulloch County is the only county to do this in a 100-mile radius from the courthouse steps.

As a constitutional officer, the district attorney has the authority and discretion to consent to a bond, which must still be considered by a judge.

The Ogeechee Judicial Circuit District Attorney’s Office, however, rarely consents to any bond at the request of a defense attorney, which means a superior court judge must schedule a bond hearing on their four county calendar. Barring extenuating circumstances, the timeline for that is two to three weeks.

Two to three weeks behind bars could very well mean job loss, falling behind on financial obligations for things like housing and child support, and even college. These are consequences for people we presume innocent because the burden beyond a reasonable doubt has not been met by the government.

But, for many, it’s worse. The claim to fame for the OJC DA’s office under the direction of DA Daphne Totten is, of course, the 4,138 days individuals spent in jail before they were ultimately acquitted by juries of their peers.

Interestingly, the charges are not traditionally a basis for consideration of setting a bond or denying it all together.

A court is authorized under the law to release someone if it is determined that the person:

Judges must weigh the above and consider the threat to the community, if any, against the possibility that the person is not guilty of the crime for which they have been accused. To do this, they often weigh ties to the community, current employment, custodial obligations, familial involvement and other factors. It is a heavy burden irrespective of its necessity.

The greatest problem with bond in the Ogeechee Judicial Circuit bond appears to be two-fold: it isn’t consistent when all other factors are similar and the accountability is lacking.

Of course, there are the terribly egregious examples, such as the three men in Bulloch County who each sat behind bars for upwards of three years awaiting a trial only to be acquitted by their peers. Or the Georgia Southern student who met the same fate. All four are questionable when another individual charged with the same offenses was let out on a $20,000 bond.

But there are other examples, too:

While it’s quite plausible that both individuals are entitled to a bond, the distinction between the two is that one has a named accuser claiming violence while the other deals with prohibited content and yet, the prohibited content case is where bond was denied.

In many judicial circuits, it is the norm to provide a reason when bond is denied completely and innocent unless proven guilty rules the roost. In the Ogeechee circuit, a form exists to provide an explanation for bond denial, but it is often not used or left blank entirely.

As is the case in many counties where individuals are facing charges for violence times, a murder-for-hire scheme organized from a prison has a man facing murder charges in Tattnall and Wayne counties. Two different judges in two different judicial circuits set bond, in accordance with the law, despite the fact that the accused has a felony record. But in Screven County, a Trooper who shot and killed a motorist in the course of his official duties spent 108 days in jail on felony murder charges out of concern for how ‘the public’ may act if he was released.

In Effingham County, individuals await trial without bond for things like financial transaction fraud, possession of methamphetamine, and terroristic threats. Probation violations were not factors.

And then there is the extreme pendulum swing in which inmates are released against the will and order of a superior court judge.

In both Jenkins County and Screven County, individuals charged with a crime and subsequently denied bond have been released and arrested again. In the Jenkins County case, the individual was out on bond for a violent assault when he was arrested again for another offense. Sheriff Robert Oglesby released him again, circumventing the bond orders and conditions, and the individual was found dead not long after from a drug overdose. In the Screven County incident, a man charged with sex crimes was released outside of the scope of the court orders. When he appeared for court and the issue came up, he tried to flee and was stopped by the happenstance of a Department of Community Supervision officer who was coming in the door at the same time the man tried to flee.

If any admonishment or discussion has occurred about the practice, it has all happened behind closed doors and without regard for providing an explanation to the very public which, undoubtedly, has been placed at risk due to such practice. After all, the ones who flee and who reoffend are, in fact, the individuals for which bond denial is intended.

*Under Georgia law, a person who is detained cannot ‘consent’ to a sexual act, specifically with a person of authority, like a correctional officer or warden, however, the act may have otherwise been consensual and committed without ‘force’ or violence.