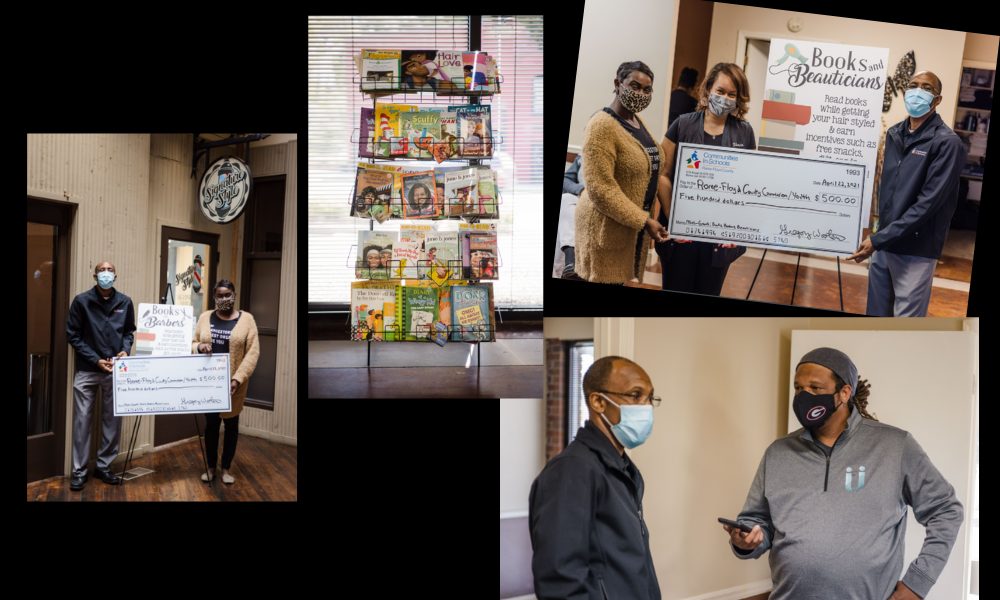 In March, the Rome-Floyd County Commission on Children and Youth (RFCCCY) kicked off their inaugural on-going event, “Books, Barbers and Beauticians,” to engage the community and encourage literacy in children. The Commission involved Wraps Styling Salon and Signature Styles as the first two locations to which kids can get their hair done, read a book of their choosing to the stylist, and then receive a little reward for doing so.

Communities in Schools of Rome-Floyd County knew immediately that they wanted to offer support. That support has been received by RFCCCY in the form of a $500 CIS Mini-Grant. CIS Executive Director and current RFCCCY board member, Gregory Wooten, said that these funds will help purchase more books and help replenish the snacks that serve as incentives for the kids.

CIS works diligently with schools and partners to identify and combat non-academic barriers, offer support to the students, and set their students on a successful academic path that leads to graduation. The importance of literacy is paramount.

“The research shows,” Wooten explained, “that third graders who are not reading at grade level are more likely to drop out of high school or be incarcerated, so literacy is a very important investment.

RFCCCY Executive Director, LaDonna Collins, expressed her gratitude. “Not only did CIS give us the $500 Mini-Grant, but they also provided magazine subscriptions to National Geographic for Kids and Sports Illustrated for Kids. So, we’re really excited that CIS is here to support this effort.”

Each time that the kids return to get their hair cut, they have the opportunity to read to their stylist. “For every fifth book they read,” Collins explained, “they’ll be able to get a gift card.”

Gift cards are available to restaurants like Steak n’ Shake, Taco Bell and Chick-fil-A, to name a few.

Sherica Bailey, owner of Wraps Styling Salon, said that this has been a very rewarding event to participate in. In addition to the encouragement she can offer the kids to read, she said she has thoroughly enjoyed her conversations with the kids during their visits. She said that sometimes she even finds herself talking about important topics like peer pressure.

Collins said that this generosity from CIS allows the Commission to feel a bit of financial comfort for this literacy project during a time that has bred a lot of financial insecurity for nonprofit organizations. She added that the Commission is entirely elated to know that they have some backing, and maybe even a little rainy-day fund.

Collins expressed that she cherishes these moments when the Commission can impact children while integrating community support. “We’re so excited about the partnership [with CIS],” she concluded, “and we’re looking forward to more partnerships in the future.”