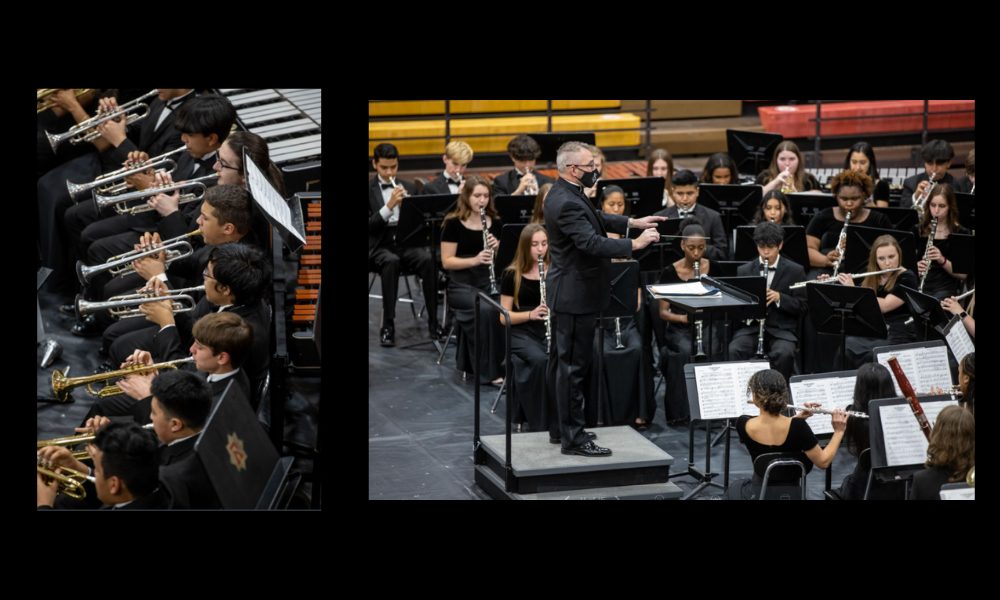 Community is often what makes the most challenging situations easier to bear. For the Rome High School Band and all who support the program, walking the road of music education together has taught them much more than how to read the notes on a staff.

This idea was on display during the Rome High School’s annual Winter Concert. This show always happens in the spring, and usually is a test run for the yearly evaluation of bands in the Northwest Georgia area. Chad Hannah, director of bands for the RCS system, received word that the Georgia Music Educators Association canceled the large group performance evaluations due to safety concerns. That announcement did not stop Hannah and his team of directors from preparing Rome’s musicians for concert season.

The students auditioned for the concert, symphonic or wind ensemble bands and were placed in one of the three depending on their level of play and understanding of music. With the uncertainty of where the concert would be held, they pressed on. They rehearsed. They practiced at home. They came to school early, and they left long after the last bell of the day had rung. And they did it all together, a process that was necessary if they ever hoped to make beautiful music.

“Music is just a tool that we use to teach the kids to be young adults and understand that we must work together to sort things out,” Hannah said. “All we have to do is watch the news to figure out there is a lot of trouble in the world, and in most accounts what they see are folks fighting and not making decisions. So, at least while we have them in our world, we can let them make mistakes, and help them to work through those mistakes and be better because of it. Hopefully, this will prepare them for the next chapter in their lives. We teach things like time management, self-discipline and how to work with other people.”

Hannah went on to say that his students were not able to have class inside the building until the last two days of the first semester because of the large groups necessary to rehearse. He said that when crowds gather at the football games to watch the halftime show, they see the organizational side of band. Concert seasons, which starts immediately after marching season, is where the students really dive into becoming more proficient in playing their instruments.

“But you know what, our kids never complained about playing outside,” Hannah said with a proud grin. “We practiced when the temperature was hot and when things started to cool off. They were happy to be there, and they were happy to have music as part of their lives.”

Superintendent Louis Byars attended the performance that was held in the RHS gymnasium. Byars thanked the members of the band for working hard during a difficult year and he thanked the parents who support the program. He also did not forget to offer his gratitude for the educators who helped the band to realize their goals and worked tirelessly to make things as normal as possible.

Beginning with the Concert Band, assistant band director Tab Brown led his musicians in three numbers that included a bouncy march titled “Marche Diabolique” by Brian Balmages. They offered three pieces that sounded as if they had played them all year long.

Next on the program was the Symphonic Band conducted by RHS music educator Adam Daniel. They ended their three-song set with “Sovereign Variants” an exciting arrangement that featured sweeping melodies and moments of bold low brass lines.

Finally, Hannah led the Wind Ensemble through three pieces of music that also left the crowd in awe of what the students had accomplished musically. Before the concert was over, Hannah addressed the crowd and told the story of a fallen Wolf who he shared the mornings with before he tragically lost his life in a motor vehicle accident.

He spoke about Jose Cornejo and his morning piano practice. Hannah said that he remembered listening to Jose practice piano on his own before classes started. Then, one day he noticed the music was gone, leaving an empty space where he once heard a young man working through his lessons on his own, and without the need of any other motivation other than his will to become a more well-rounded student. When Hannah’s ears told him something was wrong, he turned his eyes to his students who he saw were noticeably shaken. That is when he received the news that Jose and his father had lost their lives in a car accident.

The music they played together was in honor of their classmate. Needless to say, Rome High School’s band students offered comfort to a school system hurting because of their loss. And as the room filled with music, eyes filled with tears. It was a beautiful way to remember a Wolf who meant so much to those around him.

“Some schools are just now able to get the entire ensemble in the same room, so we feel lucky that we have found a way to give our students this moment,” Hannah said. “We just really love to teach our children using the foundation of music education. I am so thankful that our RCS School Board, Mr. Byars and Dr. Eric Holland, our principal, realize the importance of what we do. We want to thank them for allowing us to put this evening together for students who have worked through adversity this year.”

Continue to make beautiful music, Wolves. And continue to do it together.