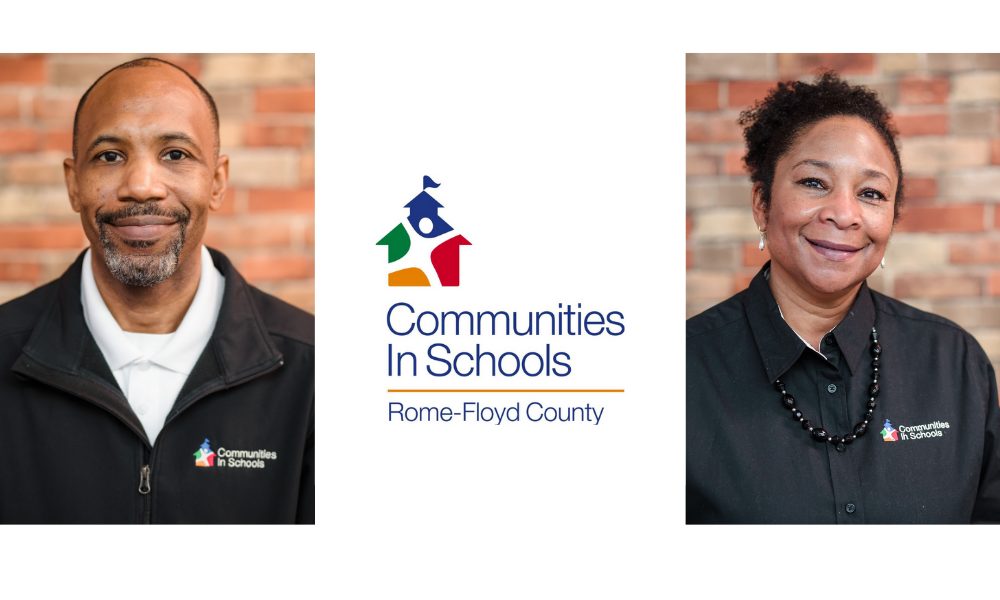 When the Rome-Floyd community needed a helping hand, in 1993, to address school dropout prevention, Communities in Schools (CIS) answered the call. Since then, CIS has served over 16,000 students in this community, with no plans to halt that momentum.

CIS is a national, not-for-profit, model that originated in New York in the 1970s. The goal was to bring community resources into public schools where they could be accessible, stable and organized. The motivation behind this model is to reach out to those students who may find themselves living out a disproportionately impoverished life, who are more at risk for missing school or dropping out altogether, and to bridge the gap between an academic struggle and a diploma and a future that is accessible and achievable.

This evidence-based program is on a mission to embrace students with support and empower them to keep on their academic pathway, leading them to future successes. However, CIS Rome-Floyd Executive Director, Gregory Wooten, says that CIS’ largest aid is primarily providing nonacademic support. This support may take many different forms, from food and school supplies, to clothes and counseling. Basically, whatever the barrier between the student and their academic success, CIS assesses and works to satisfy the need, creating a customized approach to each child and each situation.

CIS Founder, Bill Milliken once said, “It’s relationships, not programs, that change children.” Communities in Schools’ work is done by real people who form real relationships with each student. Gail Veal, Site Coordinator for the Phoenix Performance Learning Center (PLC), is one of those people. With over 20 years of experience in the field of education and six years on the CIS mission, Veal places herself on the front lines as an advocate between the schools and the student’s homes. As a Site Coordinator, it is her job to work with school administrators to identify and assess the needs of students and then to create and implement a plan that works to support the child and satisfy those needs; always monitoring progress and adjusting support accordingly.

The PLC is an innovative high school that offers students flexible scheduling in a non-traditional learning setting. Each student must satisfy certain requirements at their base high school to be enrolled.

“The community helps me help the kids,” Veal says. “I love what I do, I enjoy working with the kids and making a difference in their lives.”

Site Coordinators, like Ms. Veal, work hard to bridge the gap between school administrators and parents, to keep the lines of communication open and effective. “We try to implement a lot of parental engagement at our schools because we know that students are much more successful if parents are involved, that’s just a fact,” Wooten explains. “We put on different programs at our schools to foster that engagement.”

While community resources are paramount to the work, a large part of the CIS model involves community members. Individuals within the community may offer a little of their time and compassion to the kids and to the mission by serving as volunteers or mentors.

Wooten says that volunteers take on a few general yet vital roles within the schools and classrooms. They may chaperone on field trips and on-site events, act as a teacher’s assistant in the classroom, and sometimes even do classroom readings with the kids. The role of a mentor is a bit more involved. A mentor’s commitment is school-based and consists of one-on-one time each week with a specific student for the academic year. CIS works to match mentors and mentees based on common interests, skills, and gender. Wooten says mentors are trained and given a handbook with communication techniques and tips on how best to reach the student and develop that important relationship.

“Again, this is an evidence-based strategy, when a student has a mentor, they do better,” Wooten explains. “They do better attendance-wise, they do better grade-wise, they do better behavior-wise. We’ve had a handful of mentors to work with students from grade school through high school. That’s a very long-term investment, to work with a student from sixth grade to twelfth grade, and they watch that student grow.” Wooten has even experienced some mentors reporting that the student has actually influenced their lives positively, a mutual benefit. “That’s one of the most gratifying things that comes to be, when you give your time to a student.”

It is indeed the relationships that fuel the work of CIS, those relationships include cherished community partnerships as well as the hard work of a twelve-member board. Without the time, effort, and altruism of these people and partnerships, both Veal and Wooten agree that this mission would not be possible. Veal explains that funding from partners is used for direct resources or incentives and rewards for the hard-working students who are investing in themselves. CIS partnerships have included Georgia Power, International Paper, Alpha Kappa Alpha Sorority, and 100 Black Men of Rome-Northwest Georgia, to name a few. Wooten expresses great gratitude, as well, for the CIS Rome-Floyd board which holds a diverse group of individuals, from business owners to education to law to healthcare.

It is on that same Board of Directors, led by Alma Roman Board Chair, that one of CIS Rome-Floyd’s absolutely outstanding testimonials may be found. Wooten explains that Ms. Diana Cisneros was a teen mother in high school, receiving support and encouragement from CIS. They saw her through her pregnancy and on to graduation. Wooten says she is working in banking with multiple promotions under her belt, she has completed the purchase of a home, and now serves on the CIS board. “Full circle,” Wooten says. “That’s the pinnacle right there. And I know there will be more of those to come.”

CIS Rome-Floyd presses on, always looking for new schools and communities where they can support students and families, improve graduation rates, improve unemployment rates, and better communities at large. Currently, CIS serves every school in Floyd County Schools and Rome City Schools, with the site managed programs based at Coosa Middle School (FCS) and Rome City Schools (RCS). With the grand hope that CIS will eventually have a site coordinator in every school within Rome City and Floyd County, Wooten looks to the future in terms of branching out into other neighboring counties, as well, such as Chattooga, Gordon, Polk, Bartow with an eventual goal of making CIS regional.

In his four years as CIS Executive Director, Wooten says there has been no greater reward than watching the students be successful. “When we see the promotion and graduation rates at the end of the year,” he says, “we know we’ve made an impact. Being in this chair is a lot of responsibility, but it’s gratifying every day.”

It truly takes a village, and no organization understands this more than CIS. As they diligently work to bring the village to the child, they will continue to elevate, encourage and alleviate all along the way.

To donate, please reach out to Gregory Wooten, CIS Executive Director at 706-802-5740 or email at gwooten@cisrome-floyd.org. For more information on volunteering and mentorship, visit cisrome-floyd.org.