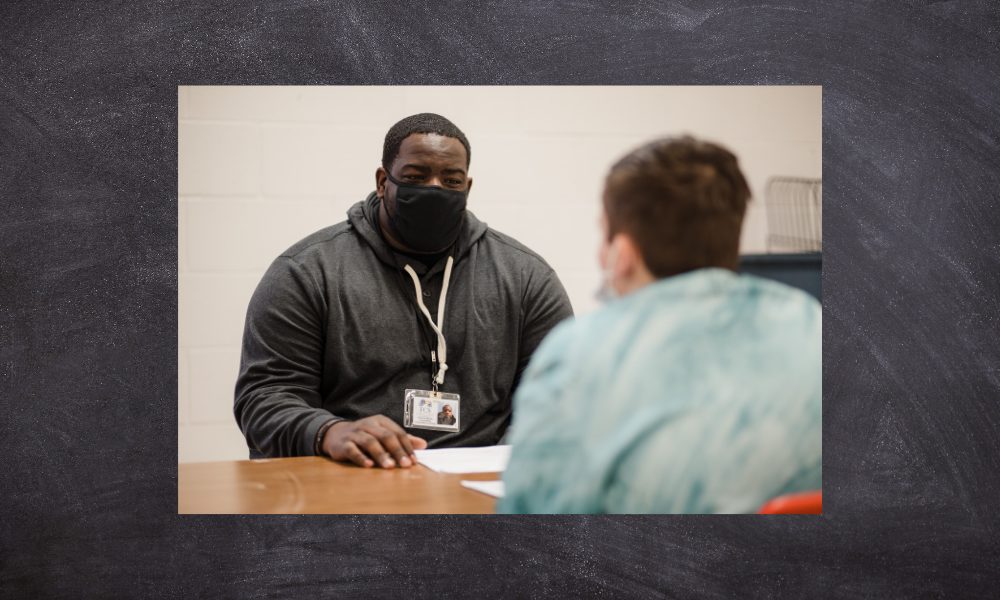 Communities in Schools (CIS) of Rome-Floyd County would like to welcome their newest Site Coordinator, Emanuel Woods, to the team!

As he accepts his role as Site Coordinator for Coosa Middle School, Emanuel Woods offers extensive experience in mentorship, and most importantly, the passion and motivation to incite positive change.

With a background in nonprofit management, Woods brings experience from several organizations that he says have heavily impacted his thoughts and actions along his own path in life.

Woods says he knows, firsthand, what it’s like to struggle, both with academics and discipline.

“That’s probably one of the biggest reasons that I’m excited to be working with an organization like Communities in Schools,” Woods says, “because of what we can do for the kids and for the school; giving some extra support to kids that are like I was.”

A Rome native, Woods graduated from Rome High School in 2008. After attending Tennessee Temple University, he began a decade-long professional journey through three states and countless missions of mentorship.

Woods says it was his Christian background that led him to Missouri, where he served as a camp counselor for five summers with Kids Across America, a Christian youth organization focusing on mentorship through outdoor education. His displayed leadership there led him to his next stop in Opelousas, La., where he served as High School Director for Hope for Opelousas. There he was able to dive into the programs and create curriculum for the students.

“That’s where I really started to mold who I was as a leader,” Woods recalls. “We were a support system for the kids, the parents, and also the community. So, I was able to be of service within the schools during the day and then also take part in the after-school mentoring program.”

Woods’ last stop before returning to serve his native city and state was with Common Ground in Montgomery, Ala. where he served as Program Director for Pre-K through 12th grade. Common Ground is also a Christian youth organization with a focus on youth development and leadership through after-school programs and camps.

“Basically, everywhere I worked was about mentoring kids,” Woods says. “This is something I’m passionate about. I know what it’s like to struggle and not have anyone, but I also know what it means to be a kid and have a caring adult step into your life and help change your course.”

After losing family while across state lines, Woods desired to return to Rome. “I wanted to get back home so I could support for my family,” he explains, “so that when hard times hit, I wouldn’t have to travel seven to 10 hours to be with them.”

Upon returning to Rome in August 2020, he took a job with East Central Elementary School as a paraprofessional and in-school suspension supervisor, bringing his experience with Rome City Schools full circle.

All the while, Woods was taking inventory of what programs and organizations had popped up in Rome that were following his passion.

“What I found is that there are a lot of organizations here in Rome that are doing great things,” Woods says. “Throughout the training I’ve been through the last couple of weeks with CIS, it’s been amazing to see what they do and some of the statistics they have, not only for Georgia but the nation as a whole. I’m excited to be here and learn more.”

“I knew he would be a viable candidate due to his extensive background in working with youth in various capacities,” Executive Director of Communities in Schools, Gregory Wooten explains. “But what stood out to me and the rest of the interview team was Mr. Woods’ presence and genuine nature. When he walked into the room, a certain calm covered the room as well. When he began to answer our questions, he was engaging, comfortable, and relatable. I am sure all of these attributes will translate to the students and others he will interact with.”

“Mr. Woods will be providing case-managed, as well as school wide, programs and services to the students and families of Coosa Middle School and Coosa High School,” Wooten explains. “Primarily, he will provide support to his student caseload by continuously monitoring their academic progress, attendance, and discipline. This work will include attendance monitoring, academic/family support strategies, small group/classroom meetings, and providing incentives.”

Woods says his caseload mandate is 10 percent of the total school population. However, there typically are many more students included than the minimum. Three weeks into his position he can already see that there is a strong need for mentors.

“It’s about mentoring and it’s about giving these kids the opportunity to succeed and hopefully keeping them in school,” Woods says. “So, I’m a part of walking alongside them and giving them a boost, just like somebody gave me.”

Woods may be brand new to this particular position, but he is wasting no time in his assessment of the students’ needs. “Through some of the conversations that I have already been able to have with the kids,” he explains, “I can see that they are open to change, but it’s my job to keep showing up for that kid, keep loving on them, and encouraging them every day.”

Wooten says that he has no doubt about the impact that Woods will make.

“Mr. Woods will add a much-needed component of compassion and understanding in working with CIS students,” Wooten adds. “By his own admission, in his youth, he mentioned he was one of the students that CIS tends to support. So, recalling that time in his life and implementing some of the techniques and approaches he could have benefitted from will no doubt foster his individual success while also improving the CIS rate of impact overall.”

Woods expresses his gratitude for being able to offer his personal experience and professional training to pay the impact forward. “Growing up, struggling, with no father in the home, there were a couple of roads I could have gone down,” he says, “but I had mentors in my life that changed my course. My passion and my goal is to do the same for others.”