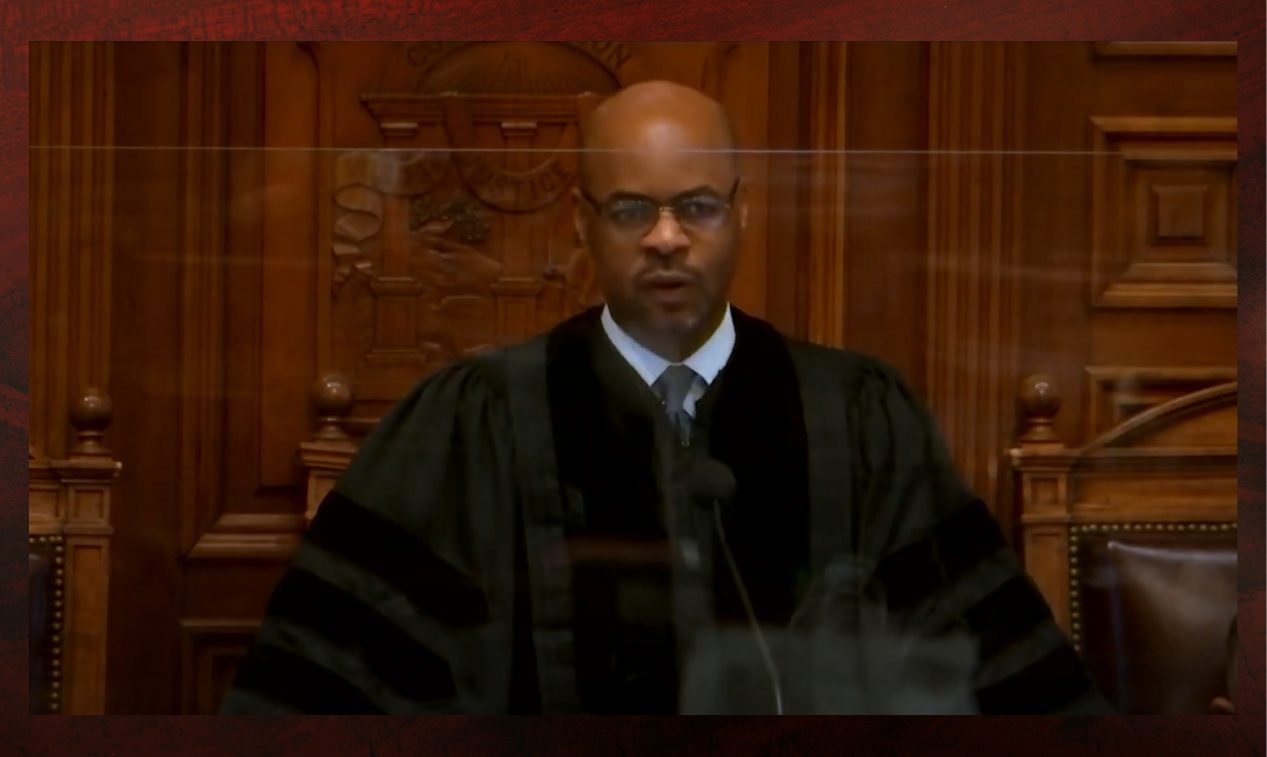 The Georgia House of Representatives and the Georgia Senate convened for a joint session Tuesday to hear Chief Justice Harold Melton speak on the State of the Judiciary.

The annual update provided to the legislative branch by the highest ranking judicial member in the judicial branch had a resounding focus on COVID-19.

Melton noted that three weeks after he delivered his State of the Judiciary in 2020, he declared a statewide judicial emergency that has remained in effect ever since. Though jury trials were permitted to resume only weeks ago, Melton said courts across the state have been “remarkably resilient, flexible, creative, and committed in their mission to uphold the law and mete out justice fairly and equitably.”

“We compel people to come to court,” Melton told the joint session. “It has therefore been critical that when we resumed jury trials, we did it right,” to safeguard all the people required to be present for a trial. Melton emphasized that under the Statewide Judicial Emergency, the courts have remained open to deal with critical and “essential” court business, though services have been limited depending on the county, staffing, and COVID infection rates.

The COVID-19 Task Force Chief Justice Melton appointed last May worked diligently on developing those safeguards and Melton lamented the effort taken to implement provisions for resuming trials, including written plans in place to ensure that jury trials can be conducted safely in conformity with public health guidance.

“We recognized that we could not suspend them indefinitely, even if the pandemic continued. There are many individuals in jail who have been waiting for more than a year, under the presumption of being innocent until being proven guilty...We realize the burden of having defendants waiting longer for trial while being held in jail. But we need to have a system that actually determines whether people who have been charged and indicted with a crime are guilty or innocent before allowing them to walk free.”

Melton reported that in Fulton County, the number of people jailed without an indictment grew from 230 to about 1,400 in 10 months. “Not only will we have significantly more cases, but the process of moving them through the system at least initially will go more slowly due to all the safety protocols.”

Nevertheless, the backlog of unindicted cases could take two to three years to clear, he said. A number of measures in the General Assembly await the approval of lawmakers, though none will provide a ‘quick fix’ to the constitutional matter that is ahead. The Senate has already approved a measure that would temporarily suspend the state’s speedy trial requirements, which dictates deadlines and timeframes for moving a case along, at least until 2023. It awaits consideration by the House with just six legislative days remaining.

Speedy trial deadlines are suspended for now under the state judicial emergency, which will have to end soon after Gov. Brian Kemp’s public health emergency order expires. Melton warned that without Senate Bill 163, judges could later be forced to acquit thousands of accused criminals statewide.

And while courthouse employees and judges recently became eligible for the vaccine under Governor Kemp’s latest order, that does not solve the problem for juries.

The Chief Justice also discussed the toll the pandemic has taken on people’s mental health, which has exacerbated drug abuse and suicide issues. He also praised the judges who have stepped up to lead their colleagues and took a moment to honor the judges who passed away as a result of COVID-19, a number that continues to increase.

Chief Justice Melton also thanked legislators and Governor Brian Kemp for the help and support provided to the judiciary over the last 12 months.

This was Melton’s last state of the judiciary address as he announced in February that he would be stepping down this summer after serving on the Georgia Supreme Court for 16 years. Presiding Justice David Nahmias was elected last week as the next chief justice.