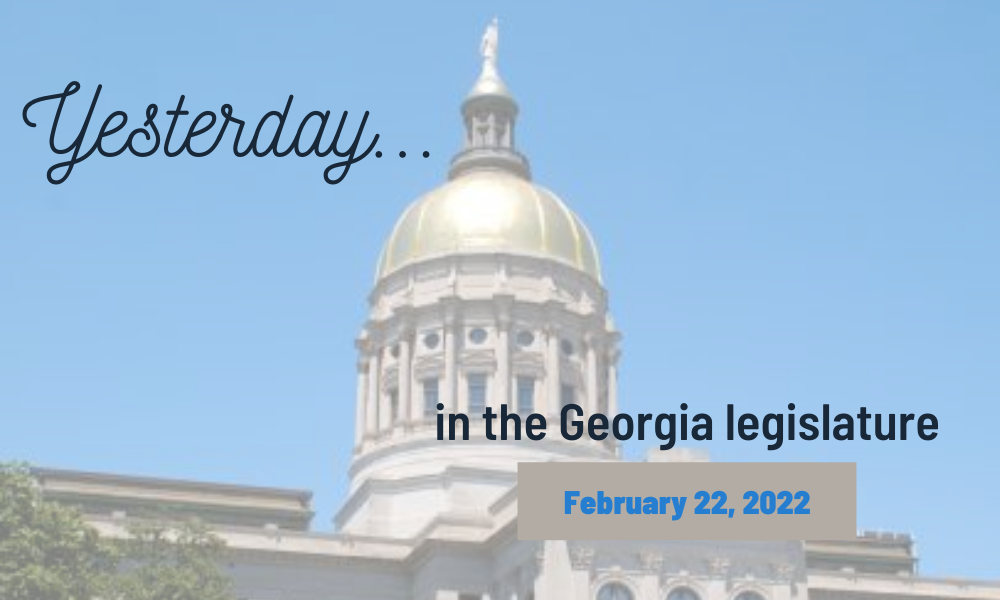 Here’s what happened in the Georgia Legislature on Legislative Day 19, which was Tuesday, February 22, 2022.
This informal report on Georgia legislative activities does not include every action by the House & Senate.

This bill requires every woman who is not released on bond within 72 hours to be tested for pregnancy. Unless denied by a judge due to safety risks or declined by the pregnant woman, the judge will determine the eligibility of a pregnant woman sentenced to a period of confinement in a penal institution to have the sentence deferred until 6 weeks after the delivery.

Beginning January 1, 2023 and every year after that, DPH will report the following:

HB 1148 – Rep. Trey Rhodes
This measure prohibits the transportation of a ‘cervid carcass’ from outside Georgia into the state if any part of the carcass contains a portion of the nervous system. The bill clarifies exceptions to include antlers, skulls, skull plates, teeth, or jawbone that do not have soft tissue attached.

If chronic wasting is detected in Georgia or a county adjacent to the state’s borders, HB 1148 grants DNR the authority to further restrict the transportation of cervid carcasses into, or within, the state.

HB 1086 – Rep. Katie Dempsey
This bill would require that healthcare workers offer a flu shot to any hospitalized patient over the age of 50 before they’re discharged from the hospital.
Passed 153-3

HB 1192 – Rep. Sharon Cooper
Allows Dept of Community Health to submit a waiver request to the Centers for Medicare and Medicaid Services (federal level) for the purpose of providing Medicaid coverage for HIV treatment services. Eligible individuals must have an HIV diagnosis, an income of less than 138% of the federal poverty level, and no health insurance.

HB 1146 – Rep. Jodi Lott
This bill requires that the vehicles driven by officers enforcing traffic be equipped with flashing lights, primarily blue in color, and removes the restriction of the Georgia State Patrol having more than two vehicles per post without such exterior-mounted roof lights.
Passed 105-55

HB 1361- Rep. Rob Leverett
This bill requires that if a General Assembly Act is alleged to be unconstitutional or invalid in action, the attorney general shall be served with a copy and shall be entitled to be heard in defense of the act, including appearing as a party if deemed appropriate by the attorney general.
Passed 163-0
Motion to immediately transmit to the Senate

Agree to Senate Substitute to HB 826 – Rep. Ginny Ehrhart
This is the bill which creates the local referendum to create the City of Lost Mountain.
Passed 98-64  – and the bill now heads to Governor Kemp’s desk

SB 395 – Sen. Bo Hatchett
Increases the number of judges in the Superior Court of the Mountain Judicial Circuit from two to three. Passed 51-1.

SB 449 – Sen. Clint Dixon
This is the ‘Parent’s Bill of Rights’ touted by Governor Kemp and other Republicans. This outlines specific ‘rights’ reserved by parents of minor students. It requires governing bodies of school systems to adopt policies or regulations that promote parent involvement in public schools. Additionally, SB 449 would provide for a process by which parents may have access to certain information.
Passed 33-21

SB 469 – Sen. Tyler Harper
This bill requires all vessels operating on coastal waters of Georgia at night to have either three unexpired pyrotechnic distress signals or one electric distress light onboard. Additionally, it requires all vessels operating during the day to have one orange flag as a distress signal. SB 469 also alters the definition of “personal flotation device” to conform with the U.S. Coast Guard’s standards.
Passed 55-0.

HB 840 – Rep. John Carson  (carried by Sen. Kay Kirkpatrick in the Senate)
Constitutes the charter for the City of Vinings, Georgia. Contingent upon approval by voters of the proposed city on the general primary date of 2022. The legislation establishes city government structure, its powers and duties, and incorporates city limits. Passed 33-19.

SR 395 – Sen. Ben Watson
Designates and recognizes February 2022 as ‘Self-Care Awareness Month’
This matter was on the calendar but was tabled.