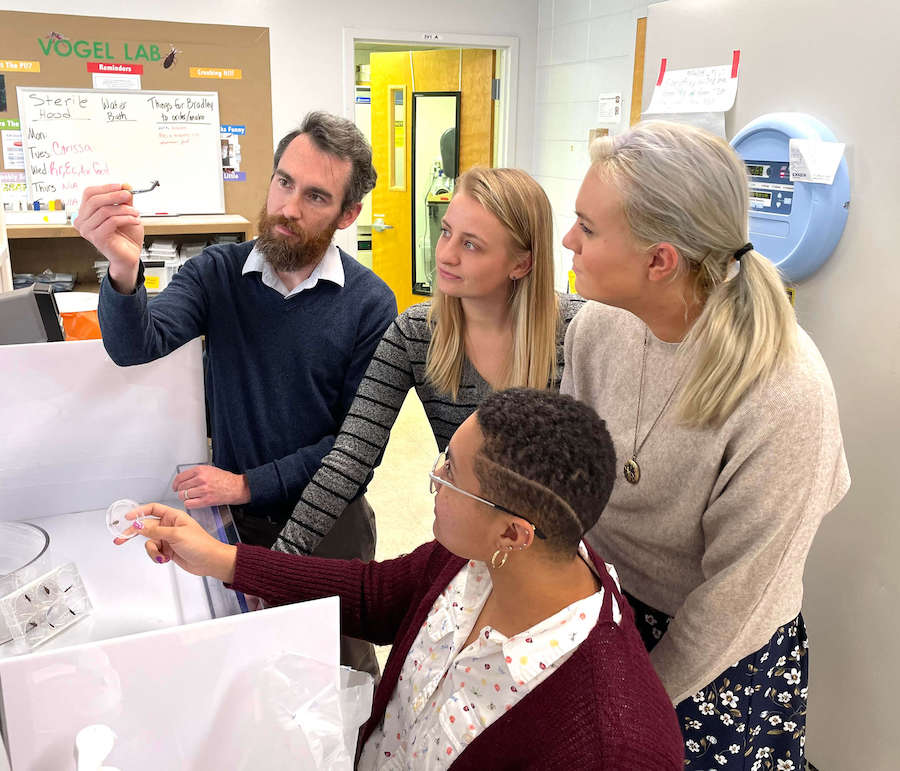 A kiss has such romantic appeal, yet some kisses just end in heartbreak.

A smooch from the Rhodnius prolixus, or the blood-sucking “kissing bug,” could be characterized more like the kiss of death — the insect is a primary vector for Chagas disease, a parasitic infection that kills more than 10,000 people annually around the globe. According to the U.S. Centers for Disease Control and Prevention, victims with chronic cases of Chagas can suffer from life-threatening heart or digestive malfunctions.

“Chagas disease is the single most neglected tropical disease in the Americas,” said Kevin Vogel, assistant professor in the University of Georgia Department of Entomology, explaining why he was drawn to perform critically needed research on the insect.

“In fact, about three times the people die each year in the Americas from Chagas disease than all the other insect-borne diseases combined,” he added. “Five to ten million people are infected with the parasite worldwide at any given time.” Considering the populations affected most, these numbers could be on the low side.

The insect is a carrier of the parasite Trypanosoma cruzi, which is spread through the feces of the insect, not the bite. However, evidence that a kissing bug has used someone for a meal is in the “hickey” type markings on the face of its victim or swelling around the eye.

The insect transfers the disease-causing parasite when the kissing bug finds a victim for a necessary blood meal, which usually happens through human or animal interaction during nighttime hours while the target host is sleeping in its nest or bed.

Besides humans, animals such as dogs and opossums suffer from the effects of the parasite transferred by a bite from the insect.

To learn more about the kissing bugs’ ability to transmit the parasite, Vogel is focusing on how the insect’s microbiome, or gut environment, influences the ability of the kissing bug to pass the parasite to its unsuspecting victims.

“If we really understand the biology of the kissing bug, then we may be able to see improved control strategies for the transmission of the parasite,” said Vogel, who established his kissing bug colony in 2018.  It is one of only a handful of thriving research colonies for the insect in the U. S.

One of Vogel’s primary reasons for pursuing this direction of research is to hopefully turn the tide of the disease’s progression.

“Since there are limited treatment options for those who contract Chagas disease, the primary way of controlling the disease is through reducing or eliminating the kissing bug vectors,” he emphasized.

Although kissing bugs are found in the Southern U.S., fortunately most species found in North America are not efficient at spreading disease. However, species in other parts of the world are of great concern in terms of disease transmission.

“For a variety of reasons, the U.S. species do not seem to be good vectors of Chagas. There are around 100 species of kissing bugs and only 25 to 30 are excellent disease vectors,” Vogel said. Answering the question of why certain species are more effective vectors is part of what drives his research.

College of Agricultural and Environmental Sciences doctoral students Nia Keyes-Scott and Carissa Gilliland are both researching aspects of the insect’s microbiome. Keyes-Scott’s research focuses on how the microbiome may influence reproduction and metabolism — for example what factors influence the number of eggs produced by each insect. Gilliland is investigating how different bacteria influence the kissing bugs’ development and how the host organism’s immune system responds to those different bacteria.

“Our overall goal is to establish a baseline understanding of what the microbes (bacteria) are doing. We know they are essential, but we would like to understand the unknown factors in the variations of bacteria in the gut of the kissing bug,” Vogel said.

In his lab checking on the colony, Vogel further describes his personal and scientific perspective on studying the kissing bug.

“I just really like working with kissing bugs. They are one of the few model systems where we can easily control the microbiome and manipulate the insect for research purposes,” he said.

With interest in Chagas disease growing worldwide, Vogel hopes to eventually expand his lab, accelerating his promising research. The more he understands the biology of the kissing bug, the more lives may be saved from this disease in the future.

“It is kind of ironic, really … This insect gives a kiss that could literally break your heart,” Keyes-Scott said of the insect at the core of her research efforts.

By: Michele Hatcher is the editor of the Hexapod Herald, the newsletter of the University of Georgia Department of Entomology.