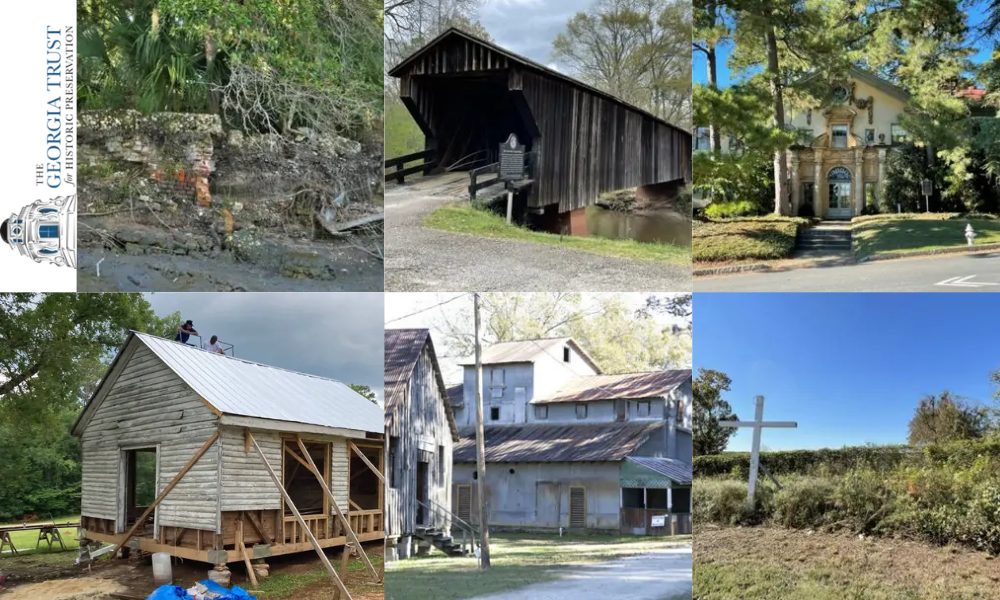 The Georgia Trust for Historic Preservation has released its 2022 list of 10 Places in Peril in the state.

“This is the Trust’s seventeenth annual Places in Peril list,” said Mark C. McDonald, president and CEO of the Trust. “To date, 95% of past Places in Peril sites are still in existence. We hope the list will continue to bring preservation solutions to Georgia’s imperiled historic resources by highlighting ten representative sites.”

Places in Peril is designed to raise awareness about Georgia’s significant historic, archaeological and cultural resources, including buildings, structures, districts, archaeological sites and cultural landscapes that are threatened by demolition, neglect, lack of maintenance, inappropriate development or insensitive public policy.

Through Places in Peril, the Trust will encourage owners and individuals, organizations and communities to employ proven preservation tools, financial resources and partnerships in order to reuse, reinvest and revitalize historic properties that are in peril.

Sites on previous years’ lists include: Capricorn Studios in Macon was rehabilitated and transformed into Mercer Music at Capricorn, receiving a Georgia Trust Preservation Award in 2021; Zion Episcopal Church in Talbotton received a $100,000 grant from Historic Columbus Foundation, enabling a full restoration and receiving a Preservation Award from the Georgia Trust; Cohutta African American Civic District received a grant from the Lyndhurst Foundation to help fund a feasibility study for the rehabilitation and sustainability of the district’s buildings; the National Bindery Library Company, one of the oldest remaining structures on Atlanta’s Peachtree Road, will be largely preserved as part of a new condo development; and the Cherry Grove Schoolhouse in Washington was a recent recipient of the Trust’s Callahan Incentive Grant, which will go towards the building’s rehabilitation.

Founded in 1973, the Georgia Trust for Historic Preservation works for the preservation and revitalization of Georgia’s diverse historic resources and advocates their appreciation, protection and use. As one of the country’s leading statewide, nonprofit preservation organizations, the Trust generates community revitalization by finding buyers for endangered properties acquired by its Revolving Fund and raises awareness of other endangered historic resources through an annual listing of Georgia’s “Places in Peril.” The Trust offers a variety of educational programs for adults and children, provides technical assistance to property owners and historic communities, advocates for funding, tax incentives and other laws aiding preservation efforts, and manages two house museums in Atlanta (Rhodes Hall) and Macon (Hay House).

Summary Information on each Places in Peril Site

Although the neighborhood is listed in the National Register of Historic Places, it has not been designated by the city as a Local Historic District, which would offer protections from demolition through city ordinance. Without that protection and review, the past decade has seen many historic, architecturally significant homes demolished and replaced with insensitive infill. Nearing a point of no return, the district risks losing its National Register designation if too many contributing buildings in the neighborhood are lost, and the city risks losing some of its finest architectural heritage.

Chattahoochee Brick Company (Atlanta, Fulton County)
Located on the banks of the Chattahoochee River, the Chattahoochee Brick Company was founded in 1878. The company was notorious for its use of convict leasing, where hundreds of African American inmates were forced to work in deplorable conditions without regard to their safety, leading some scholars to refer to the convict leasing system as “slavery by another name.” Many of these men were worked to death or left permanently disabled from extreme punishments. Today all that’s left on the site is a vacant, overgrown lot.

The land is currently zoned for industrial use, and the brick company structures have already been lost to prior development attempts. Many people, including descendants of Chattahoochee Brick Company convicts, consider the site hallowed ground. Preservation of the site will generate healing, foster dialogue and lead to an understanding of a difficult chapter in Atlanta’s history.

Gay, Georgia Fairgrounds (Gay, Meriwether County)
Originally a small farming community, the town of Gay was incorporated after its first store and post office were opened by William Gay in 1882. Throughout the 20th century, the town flourished with the broader agricultural trends of the state. In 1972, after a period of decline in activity, descendants of William Gay established what became known as the “Cotton Pickin’ Fairgrounds” on the site of the town’s cotton gin and peach packing complex. Since then, the fair has been held on the first weekend of May and October every year.

Because the grounds are active only two weekends annually, the structures remain largely abandoned and neglected throughout the year.

Georgia B. Williams Nursing Home (Camilla, Mitchell County)
The Georgia B. Williams Nursing Home was a nursing center and private residence of Beatrice Borders, a third-generation African American midwife. Her home became a refuge for over 6,000 African American mothers who had nowhere else to go, allowing their newborns to enter the world in a safe and healthy environment during the Jim Crow era.

The building has been vacant since 2004 and is currently boarded up. Due to deterioration over the years, the home is now uninhabitable, making it more susceptible to threats of demolition.

Good Shepard has seen a decline in parishioners. Financial resources for the maintenance of the schoolhouse have dwindled. Storm damage has taken a toll. The Good Shepard School is worthy of preservation as a resource to the community to continue the legacy of its founding deaconess.

Imperial Hotel (Thomasville, Thomas County)
Built in 1949 and operated until 1969 by Harvey and Dorothy Lewis Thompson, the Imperial Hotel was Thomasville’s only hotel that exclusively accommodated Black travelers prior to integration. The hotel was featured in the Green Book, a travel guide for African Americans during the Jim Crow era.

The Imperial Hotel officially closed its doors to tourists in 1969 and was later used by the NAACP. The building has remained vacant since 2001, leaving it in a state of neglect. Recent efforts to stabilize the building have been successful, yet the long-term future of this important African American cultural resource remains in question.

Red Hill Cemetery (Milledgeville, Baldwin County)
Situated on a hill overlooking the 4,000-acre Old State Prison Farm in Milledgeville, the Red Hill Prison Cemetery is home to over 600 graves of incarcerated men and women who died at the prison between 1911 and 1936. License plates manufactured on site by the prisoners were used as grave markers for the deceased prisoners, indicating each grave by number, not name. Once the prison closed and moved locations in 1937, these graves were left unattended and neglected.

The history of this site has remained an afterthought through much of the last century. Trees and undergrowth took over and obscured the graves, while the license plate markers have been left to rust and deteriorate. Without continued advocacy and acknowledgement, the history and context of the site will be threatened once again.

Because the Red Oak Creek bridge has remained open to traffic, there is a consistent threat of damage to the structure. With its popularity, the bridge provides an opportunity for improved heritage tourism, greater access for recreation and continued appreciation of history, but first, further protection of the bridge is necessary to ensure its continued longevity.

Thicket Ruins (Darien, McIntosh County)
The tabby ruins are all that remain of a sugar mill and rum distillery built in the early 19th century. Operated by enslaved Africans, the site also featured tabby living quarters for the enslaved, four of which remain. After being hit by a hurricane in 1824, operations ceased at the mill and the land was converted to a cotton plantation. Following the Civil War, materials and pieces of tabby were sold to the freed men and women, who established a community nearby named Carnighan.

Being built along the Carnochan Creek, the ruins have worn away over time due to the eroding shoreline. The current residential community has maintained care for the ruins as best they can; however, working buildings are being lost into the creek. The effects of climate change are a direct threat to this early coastal resource.

West Broad Street School (Athens, Clarke County)
The West Broad Street School, a collection of three education buildings, sits on a piece of land dedicated to the education to African American students from the late 19th century through integration. Although it has not been used as a school for many years, the buildings have remained in use since they were constructed.

Recently the Clarke County School District proposed demolition of the buildings to allow for new construction of an early learning center. With no preservation guidance, the site’s historic architecture is at risk of being severely altered or lost. The school district has agreed to reconsider its proposal, though final plans have not been approved and a preservation outcome is not guaranteed.