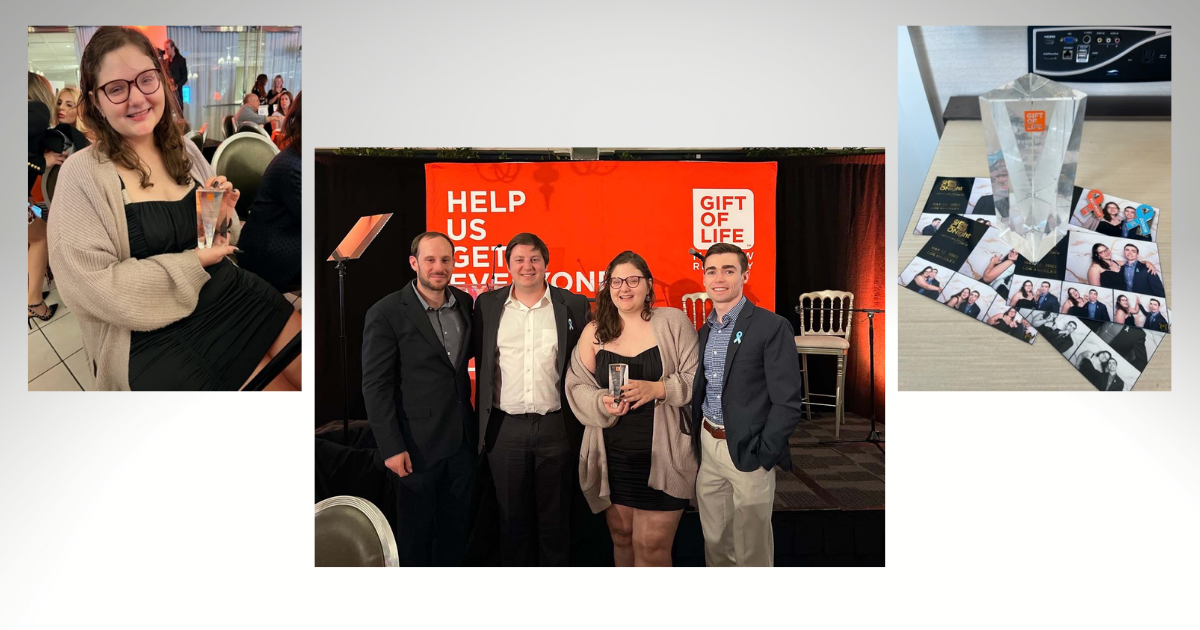 Brianne Dollar (pictured center-right) receives the Steve Bochco Award at the Gift of Life gala in Los Angeles. She received the honor thanks to her being responsible for more than 30 fundraising drives and registering over 300 bone marrow donors.

A Georgia Southern University student is saving lives, and is now receiving national recognition for her work.

In May 2022, Dollar attended a gala in Los Angeles for Gift of Life, an organization supporting bone marrow transplants. Dollar has been an ambassador for the organization for years and is responsible for organizing events in the group’s name.

While there, she was surprised with the Steve Bochco Award, named after the late television writer and producer, who had leukemia.

The accomplishment is the culmination of hard work and passion for the cause. For Dollar, the journey was far from an easy one.

In middle school, Brianne Dollar fell off her bicycle. However, she remembers how lucky she felt when she found a $100 bill near the crash site.

From this point on, her pendulum between luck and bad luck began to swing with a wider arc.

Dollar grew up in Hinesville, Georgia. As a high school student, she was looking forward to attending college as an engineering student. During her first week of senior year, she came down with a case of strep throat.

In November 2017, she visited her second emergency room after fighting the same symptoms for months. By that time, she was already fearing what was making her sick. A call from the doctor confirmed those fears.

Tests showed she had leukemia, and some cells were found in her spine. Dollar spent nearly 120 days over four rounds in Children’s Healthcare of Atlanta Atlanta undergoing intense chemotherapy.

“It would have been shorter, but I went into septic shock the last round,” Dollar said. “And then that was it for the first time.”

The first time. No more than a year later, her symptoms returned. This time, she didn’t even answer the doctor’s phone call. She knew what the tests said.

“My phone was sitting on my bed and it started going off,” she recalled. “I said, ‘I’m not answering it.’ My dad answered it. I don’t know what possessed me, but I started making a sandwich and I just dropped a can on the floor just hearing his side of the conversation. I was like, ‘No, no, I’m done with this.’”

She spent a few more days at home to celebrate Christmas with her family, and then packed up and headed back to the Atlanta hospital for another fight with leukemia.

After this round, Dollar found herself on the registry for a bone marrow transplant. In this arena, transplants aren’t based on blood type. Rather, there’s a collection of proteins doctors look for to determine a match.

To her luck, they found a match for her. But along the way, complications with the donor arose, and they had to find a new donor. Even luckier, the proteins in her body matched many other donors.

Dollar was quickly paired with a new donor, and the timing couldn’t have been better.

“It was a week before my birthday,” Dollar laughed. “It was a very fun weekend, but not so fun prep week for that. We just started making sure that I was going to go for a transplant.”

The operation was conducted in February 2019. While the transplant was a success, it wasn’t without its complications. As a result, Dollar developed Graft versus Host Disease, where the transplant and the body fought. After months of additional treatments and recovery, Dollar learned she had completed her treatments.

In September 2019, she was told she could stop her immunotherapy, she could go out in public more often and didn’t need to wear a face mask.

“That was short-lived,” she quipped.

Dollar was given a few months of “normal life” before the world would mask up because of the pandemic.

That “lucky-unlucky” pendulum was swinging with every step.

When it came time to decide the next phase in her life, she spent no time picking a path. She knew it was time to attend college.

“It was like something I’d been waiting to do,” Dollar said. “It was kind of like that final thing that had kept being pushed off by cancer that I could finally take back. It was really hard for me to go back, but it was also very freeing to go back because I waited so long.”

She had her list of choices for schools, but she already knew where she wanted to go. In 2020, Dollar enrolled at Georgia Southern University as a biomedical engineering student.

As though the game of tetherball with luck couldn’t keep swinging, the beginning of her college career was more accommodating than she had planned for. Due to the COVID-19 pandemic, courses went online. That turned out to be an advantage for Dollar. It allowed Dollar to take her courses while she worked on improving her limited mobility.

After a short while, she noticed she wasn’t as good at math as she used to be. It was time to switch majors, but she wasn’t leaving the medical field. Luckily, she found a program she loved and a field she could make an impact in.

“I’ve been doing a lot in public health,” Dollar said. “My friends and I started a Disability Advocacy Club on campus, and I was involved in student government. Where one of my friends was in public health and I loved everything she did.”

Her new public health program matched her strengths and ambition to be more involved in the policies which affected her and her family during her treatments.

That impact is already being noticed.

When planning for the gala in May, she invited her donor to attend with her. Little did she know that not only was he already going to attend, but he was also going to be called to the stage to present an award. He presented her with the Steven Bochco Award.

“I shot him daggers and I was like, ‘You’re joking,’” she laughed. “I was not expecting that. I was not prepared for that emotional roller coaster.”

She received the honor thanks to her being responsible for more than 30 fundraising drives and registering over 300 bone marrow donors.  Four of those donors have led to donor/recipient matches.

“One of my friends died because he didn’t have a donor and they were waiting on one,” she said. “It has always hit me very close to home. It gives me a sense of being able to help them in a way and honor them and help them.”

Dollar is continuing her work and has a presence on the Statesboro, Armstrong and Liberty campuses. Her involvement stretches from her own student organization, to being a member of the Student Government Association and other advocacy groups where she plays a leading role in helping others get the resources they need.