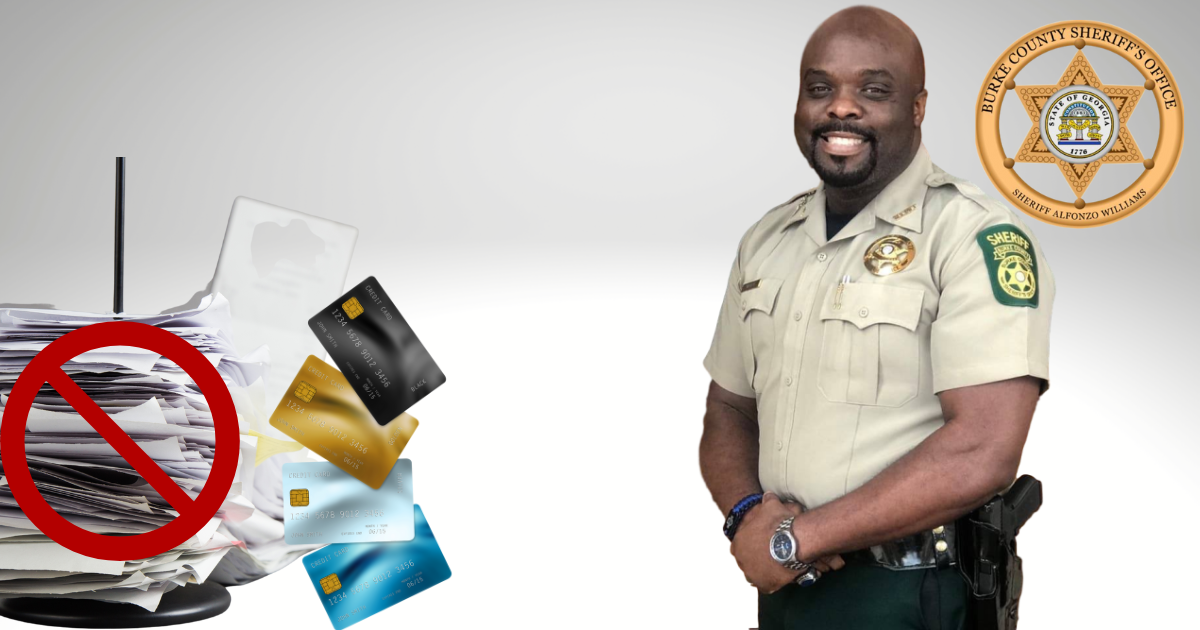 The Burke County Sheriff’s Office maintains no itemized receipts for the office’s credit card charges, an account that has paid out upwards of $40,000 in the last eight months alone.

The information came to light Monday following an Open Records Request filed by TheGeorgiaVirtue last week. The Sheriff’s Office also told TheGeorgiaVirtue that it maintains no documents detailing the individuals authorized to use the office credit card(s) and that it has no credit card statements for the period beginning September 1, 2021 and ending June 1, 2022.

The request followed the article featured in The True Citizen and the subsequent press conference held by Sheriff Alfonzo Williams which suggested the Sheriff hid grant money from the county. Williams vehemently denied the allegations, calling the article “bullsh*t” and “reckless” in his press conference. Williams articulated that there was more to the story than portrayed in the article.

From the ORR response from Sheriff Williams himself, it appeared the office initially intended to provide the actual credit card statements, noting that they needed until Wednesday to prepare the records and redact sensitive account information. But the Office emailed records at 9:15 a.m Monday morning with apparent screen grabs from the online payment portal.

Upon reviewing the seven to eight months of documents for bank statements and seven months , TGV sought additional clarification, asking first if the office intended to provide the actual credit card statements and then seeking individual receipts for the ~150 transactions paid for over the same time period.

Specifically, to the credit cards, the office stated that it does not possess any monthly billing statements nor does it maintain receipts for purchases made on the credit card. The Sheriff merely signs his name on the printed screen grabs, sans details. The office then pays the bill. The practice appears to contrast other financial practices in the office, such as requiring two signatures on checks written from the checking account and an extra approval form for expenditures paid without a Purchase Order.

Screen grab photos of the transaction portal omit search criteria used to find the records. A credit card statement would define the billing period, interest assessed (or not assessed), and other pertinent information.

Below is the email exchange between TGV and BCSO in its entirety.

Outside of the email exchange with regard to obtaining the actual receipts, a comment from Sheriff Williams on the details of the receipts was not sought because it would not be verifiable by TheGeorgiaVirtue. Further, based on the email from the Financial Analyst at BCSO, it appears the only ‘check’ on the credit card expenditures is Sheriff Williams as the employees submit payment once Williams signs the credit card bill as the correct amount.

The lack of receipts for credit card charges leave much to be desired and present more questions than answers. Some of the charges are easily identifiable and can be cross-referenced to events held by the Georgia Sheriff’s Association or the Burke County Sheriff’s Office. Others for hotels, airfare, rental cars, and fine dining are more unclear as to how they relate to the business of Burke County citizens and public safety.

Examples of expenditures include:

Receipts would show itemized details of purchases, but even in the absence of those receipts, a general understanding of how the credit card is used can still be determined.

Several of the hotel charges are in Montgomery, AL, home of the private school Faulkner University, where a number of BCSO deputies and employees obtained degrees. But other charges are difficult to distinguish just from partial charge codes.

The list below was based off of the screenshots provided by the Sheriff’s Office.

For a number of credit card charges, it was simpler to cross-reference expenditures to Williams’ posts on social media.

For example, on May 13, 2022, the credit card was used for ‘Airport Parking of Miami,’ the same day Williams posted on Facebook that he was off to Belize for a short trip with his family and friends.

Williams posted in April 2022 that he and his wife were “enjoying friends in Tennessee.” During the same time period, on April 21 and 22, the BCSO credit card shows expenditures for dining establishments and hotels outside of the Waynesboro/Augusta area.

Funds to Be Used at Sheriff’s Discretion

By the state constitution alone, the Office of the Sheriff has broad discretion in its use of funds. Additionally, Williams also holds that since the funding from the checking account, which pays the credit card bill, is private funding from Plant Vogtle, he has even more discretion in the use of monies. In his Thursday press conference, Williams said his office is fiscally responsible and he’s stretched the money six months longer than it was intended to last.

“We have never ever had a single complaint from any of our partners who has given us grant funding. Ever.  about our discretion.  There has never been a question about discretion and spending …Our partners are satisfied with our abilities to expend that money…there is not a single dime unaccounted for.”

In his press conference, the Sheriff responded to questions about his daughter being paid by the office, which he explained was a result of her interning over a school break. He said the same has been done for upwards of ten interns since he took office five years ago.

But Williams said “No government funds” have been used to pay interns. While Williams is correct that the funding from Vogtle is ‘private,’ once the funds are deposited into the bank account for the Sheriff’s Office, the funds become ‘public’ and are subject to the same standards and laws as other public funds.

Various state laws and regulations require a Sheriff’s Office to maintain records on nearly everything, regardless of the connection to or autonomy from the Burke County government. The Sheriff’s Office is a constitutional office subject to state records retention schedules. It’s also a local government agency, subject to local government records retention schedules.

State schedules also require the office to keep records “documenting the certification of employees who are authorized to sign fiscal and contractual documents,” like a credit card, for seven years, according to Rule LG-08-017 and Rule GASC-01-016.

LG 08-012 requires documents retention for grants from another governmental agency for three years. Because the Housing Authority grant was placed in the same account as the Vogtle funds, there is no distinction between the funds. [See also Rule GASC-01-012]

Under Rule LG-01-034(A) and (B), which is not exclusive to grants from state or federal funds, applications and documents for awards, grants, and projects must be kept for seven years after completion of the award.

The Georgia Archives institutes the rules through its statutory authority under OCGA 50-18-92.

TGV compiled the information provided in the records request to analyze the accounting practices of the Sheriff’s Office. Specifically analyzed funds include those in the account from Plant Vogtle – $375,000 – and $50,000 from the Housing Authority.

The office also used the funds to pay rent and security deposits for a new rental property for the Sheriff’s Office, provide lunch for BCSO staff, DJs for events, compensation for a Santa actor at a holiday event, and a handful of other things.

For example, Katerwerks provided an invoice totaling $4,985.92 for the holiday party at Jones Creek Club. But records show payments totaling $1,808.24 more than the invoice amount. The first two payments were made with a check, but the additional amount came from the credit card three days later.

As seen in the document, the office made a number of other deposits over the last several months, however, none of the bank statements or the bank reconciliation documents reflect from where the money came.