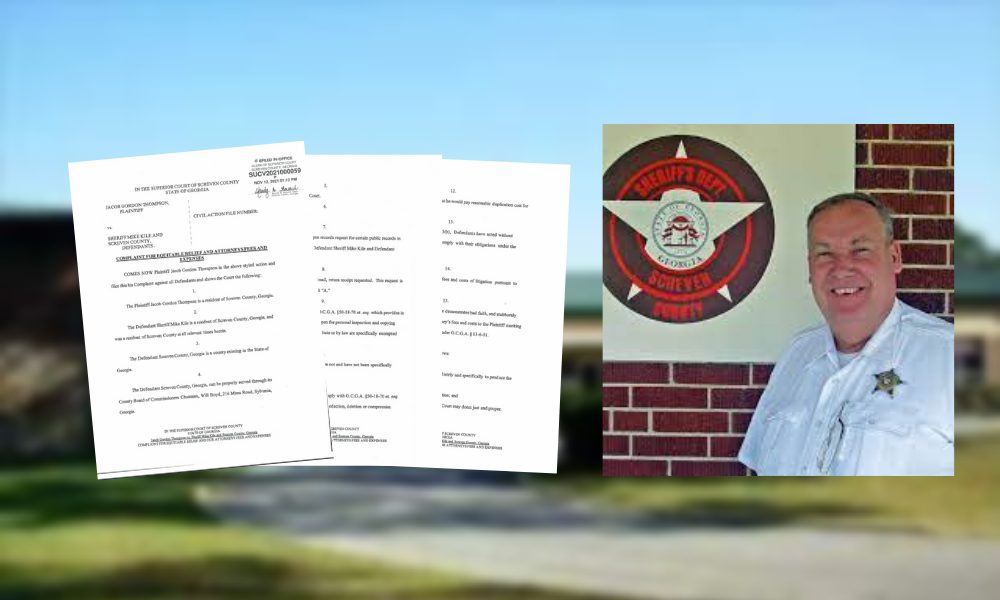 The suit was filed on November 12 by attorneys representing Jacob Gordon Thompson, a former Trooper with the Georgia State Patrol, after certain requests for public records went unanswered by Kile and the county. According to court documents, Thompson, through his attorneys, sought records related to the August 7, 2020 shooting involving Thompson and motorist Julian Lewis. That shooting led to felony charges brought by the Georgia Bureau of Investigation and District Attorney Daphne Totten, but an indictment was handily rejected by Screven County grand jurors earlier this year after an eight hour presentation by the District Attorney’s Office.

While the DA’s office has allowed evidence and the case file generally to be viewed by the family of Julian Lewis, Thompson and his legal team have not been privy to the same records. Court records now indicate that the defense attorneys sought to obtain various records through respective agencies after the charges were dismissed, but have – to date – been unsuccessful.

An exhibit filed with the suit includes a September 2021 records request filed by Parker Consulting & Investigations which requests body-worn camera footage of Investigator Dwight Singleton from August 7 as well as any supplemental reports prepared by Singleton, then-Chief Deputy Brett Dickerson, or “any other sheriff’s office employee.”

The same letter seeking records from the Sheriff’s Office cites the No Bill of Indictment of Thompson from June 2021 because if the case was pending, Georgia law would not require that records related to the criminal investigation be released. A pending investigation is often utilized as a means for agencies to shield documents from public disclosure, but it is by no means a requirement that the records be withheld. The Open Records Act merely offers a provision for the records custodian to use their discretion when a case is ongoing, which is why camera footage and other documents from officer-involved shootings is released in some instances, but not in others.

But whether or not a case against Thompson is still ‘ongoing’ has been a point of uncertainty for the last four and a half months for Thompson, the family of Julian Lewis, and the general public.

Under Georgia law, District Attorney Daphne Totten has the authority to bring the case before a grand jury a second time, but has thus far refused to publicly take a position. There is no statute of limitations on charges of felony murder, meaning Totten’s absent decision leaves a stamp of unfinished business on the Thompson case for all of the parties involved. It also means that her lack of decision would indefinitely withhold documents from not only the attorneys for Thompson, but the public generally – with the exception of the Lewis family and their attorneys.

The lawsuit claims that Kile has not fulfilled the requests in accordance with the law and has acted “without substantial justification” in its failure to supply the records. It is not clear from the suit whether Kile’s office has refused to respond or has provided a justification.

As far as the records regarding Thompson’s incident go, as a constitutional officer, Sheriff Mike Kile has the authority to release any documents from his office at his own discretion regardless of what the district attorney’s office seeks to do, particularly because his office is not the investigating agency for any criminal matter related to Thompson.

As a remedy, the lawsuit asks the Court to order Kile and the county to produce the records as requested and pay attorneys fees and litigation costs for the suit necessary to be filed in order to gain compliance with the statute. Under Georgia law, the superior court is the proper venue for remedy in open government violations. According to PeachCourt, the case has been assigned to Judge Gates Peed.

You can read the full suit as filed below.