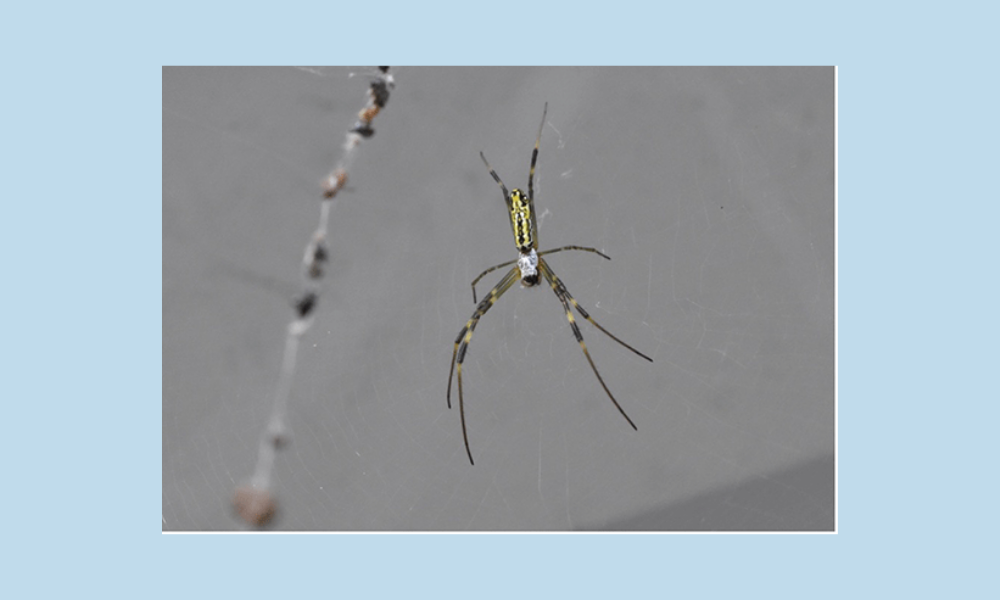 The wide mountains of the lower Appalachia teem with insects and arthropods of a wide variety. Lately, however, a new breed of spider has invaded the forests and lawns of the Georgian north. Jorō spiders, a species of orb weaver spider that hailed from Asiatic countries like China and Japan, now dominates the homes of Georgians. But what are these new components of the ecosystem? Christopher Brown, Ph.D. and professor of biology at Georgia Gwinnett College, weighs in with the facts. Brown specializes in both zoology and animal behavior and offers a solid voice on the topic.

When asked about the dangers of Jorō spiders, Brown states these simple but important facts. “All spiders are venomous, it’s how they paralyze their prey and dissolve their insides, letting them feed,” he explained.  “But Jorō venom isn’t harmful to people. Even though Jorō are not native to North America, they do not have venom that would hurt too much.”

“What you are describing is called aposematism or warning colors,” he said. “The colors on these orb weavers are more likely signals to prey or to birds.”

Interesting too is the fact that Jorō spiders create multi-level webs, something unique to them in their family. This raises the importance of signaling other insects and vertebrates of where their webs are, to prevent accidents like an unwitting human walking through all of them. Often, when a Jorō sees a threat to their web, they run away and shake the web vigorously, drawing attention to where it is in the hopes of avoiding conflict. That’s why their webs shake when people get near.

So how did these new, apparently harmless spiders get to Georgia? According to Brown, the spiders hitched a ride on shipping containers from ports of China and Japan. Of note, Jorō spiders are a recent development on the East Coast. Brown states that “the interesting thing about Jorō is that they came recently (2013-2015) and are only in North Georgia.”

Of note is that the climate of Georgia is very similar to large parts of Japan.

“I think the temperature levels of Georgia as compared to Japan are very similar, due to our similar distances to the equator,” said Brown.

Spiders like warmer temperatures. Georgia, obviously, has that in spades, and because of our generally humid environment, the temperatures do not dip as severely as they would in another southern state such as Virginia.

But what do they do? Do they qualify as an invasive species? Brown says yes. They hold a similar pattern to the python population of the Miami region. Jorō spiders have broods of up to 1,500 spiders. In the fall and into the winter, the female spider mates, lays her hatchlings, and when they emerge, she dies.

What’s exciting about Jorō spiders, and orb weavers in general, is that there is potential use for research. The golden silk orb weaver, a native family member to the Jorō, has seen many uses come from its unique golden webbing. Golden silk orb weavers have even been to space, to see how their behaviors are changed by zero gravity. There is some interest around orb weaver webbing molecular makeup, and how that can be studied and used for biomedical purposes, such as stitching nerves together. The webbing will hold the nerves in place and dissolve quickly inside the body, leaving no need for invasive stitches.

Brown believes that with Jorō spiders, their numbers are beginning to weigh on the environment.

“I took down several Jorō webs in my backyard, and the next day there were new native spiders setting up webbing,” he said.

This implies that the Jorō are taking the places of natural Georgian spiders. While Brown theorizes that while Jorō aren’t a menace to people, their immense broods and invasive nature heavily impacts the natural environment, comparing them to kudzu, an invasive plant that also comes from Japan.

Whether beneficial or invasive, one thing is clear to Brown.