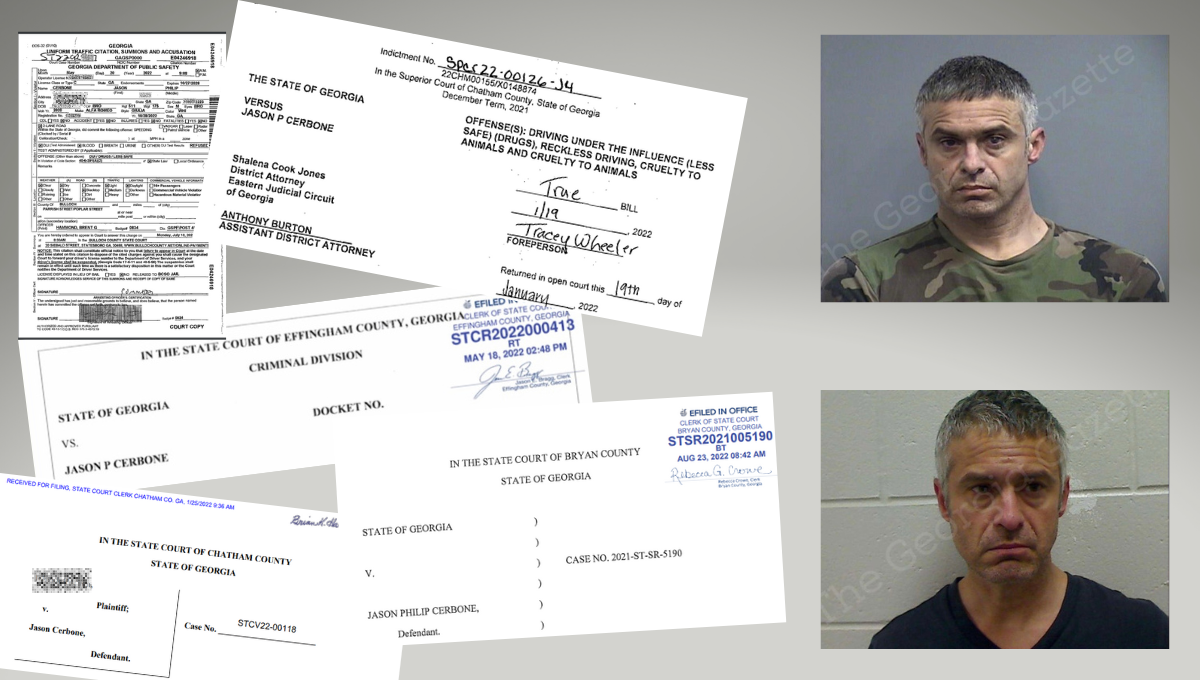 A highly regarded, well-connected criminal defense attorney has recently found himself at his own defense table…four times over.

Savannah-based DUI attorney Jason Cerbone is a self-proclaimed victor for DUI and divorce cases. He’s taught courses. The awards are his. He’s garnered national accreditations. His website and social media accounts tout victories for distinguished parties in need of ‘the best’ legal representation.

“Why do bail bondsmen, experienced attorneys, and judges call us when they’re facing DUI charges? Because we win. They know our track record of successfully defending DUI cases.” —Cerbone Law website

But for the last year, Cerbone has taken the crash course on what it means to be a defendant in a DUI case. Thus, Cerbone has found himself entangled in a number of battles since last summer, including:

Charges Across the Region

Authorities in several different jurisdictions have cited and/or charged Cerbone over the last year.

“Defendant’s aggressive act of attempting to drive at a high speed between vehicles by straddling two lanes of travel shows willful misconduct and entire want of care that raises the presumption of conscious indifference to consequences.”
Read the lawsuit.

The case initially began in Recorders Court after SPD cited Cerbone for Reckless Driving, Striking a Fixed Object, Too Fast for Conditions, and Failure to Maintain Lane (November 2020)

Some filings reflect a guilty plea of Too Fast For Conditions with a nolle prosse (dismissal) of the other charges in February 2021.

In January 2022, a grand jury considered the facts of the same incident. A True Bill was returned DUI – drugs, Reckless Driving, and two counts of Cruelty to Animals. The indictment alleged that Cerbone drove under the influence of Amphetamines, Benzodiazepines, and THC. It further alleges that Cerbone drove recklessly and ultimately caused the death of two dogs, which were unsecured in the vehicle when he crashed.

The felony case was then transferred to State court in February 2022 and in August 2022, prosecutors dismissed the case entirely. Because the acts stemmed from the same act in 2020 and were not severed from the charge to which he entered a plea, prosecutors cited concerns of double jeopardy. Interestingly, however, the Recorders Court documents show an outright dismissal of all charges, per the officer, not a plea of guilty for one offense.

Cerbone represented himself, according to court documents, after attorney Michael Schiavone withdrew as his legal counsel.

September 2021 arrest in Bryan County for Driving Under the Influence (drugs) and Failure to Maintain Lane. This is four days after the collision in Candler County.

Over the course of a year, Cerbone’s Bryan County case has included representation by Lloyd Murray, Sylvia Goldman &  Maryann Donnelly, Ben Sessions, Michael Capron, and Cerbone himself. His journey to adjudication, however, has been anything but smooth.

In August 2022, Judge Billy Tomlinson revoked Cerbone’s bond and Cerbone remanded him to the Bryan County jail. He also learned that the Department of Driver Services suspended his license due to a “mental or physical impairment.” A week after the bond revocation, Cerbone’s newest counsel filed a Motion to have Judge Tomlinson removed from the case as well as the Solicitor, Don Montgomery.

Tomlinson denied Cerbone’s request for recusal, which prompted Cerbone, via Capron, to file a notice to the Georgia Court of Appeals. Liberty County State Court Judge Jeffrey Osteen stepped in at the request of Tomlinson, filed an order following reconsideration and vacating the denial of the Motion for Recusal, and then set a hearing date for August 2022.

One day after Cerbone was booked into the jail, Judge Osteen denied Cerbone’s request for recusal of the judge and prosecutor, citing untimely filings and no evidence of need. The next day, Tomlinson ordered a mental health evaluation of Cerbone while he was in the custody of the Bryan County Jail.

Bryan County Jail records show a release date of September 1 for Cerbone. The case is tentatively scheduled for jury trial in October 2022.

Woven through the webs of legal representation across counties are a number of filings by Cerbone himself. On several occasions, Cerbone submitted sworn affidavits to various courts asserting what other court officers promised him as he worked to negotiate his cases.

Cerbone left little to the imagination in the filings. Notating every instance of what he determined to be less than favorable treatment by various parties, Cerbone’s filing read more like a ‘tell-all’ than a pleading.

In an Effingham County filing in June 2022, Cerbone wrote that he called now-former Effingham County State Court Solicitor Mark Lee 22 times with conversations totaling over two hours. He also went to Lee’s home in April 2022, he wrote, to discuss his case.

“I waived my Fifth Amendment rights when I spoke with Mark Lee. I was there for about an hour. While I was talking with him, Mark Lee said to me, “You don’t need to worry about the Effingham DUI. I was relieved.”

Cerbone then received a court notice for June 9, 2022.

“Now I feel like I am being thrown under the bus. He said “You don’t need to worry about the Effingham DUI.” I have not done one thing about it. I have no lawyer, I have no discovery. I believed Mark Lee to be a man of his word.”

Cerbone wrote that he called and texted Lee a number of times after receiving the court notice but did not hear back. Lee, however, abruptly resigned from the Solicitor’s Office in June of 2022 after years of serving — leaving without any notice or completing exit paperwork for the county.

Bryan County Filing on 3-for-1 Deal

In a Bryan County filing in August 2022, Cerbone upped the ante and seemingly ignited the pathway to resolution. His 12-page filing threw lawyers, prosecutors, and judges alike under the proverbial bus.

The affidavit included a footnote that Judge Tomlinson is a ‘close personal friend’ of his father, but the Motion by his attorney, which included the affidavit, stated that Tomlinson had a bias and prejudice against Cerbone.

Additionally, the affidavit attests that Cerbone was told if he entered dui/drug court in Chatham County, the charges in Effingham and Bryan county would go away.

As of publishing, Chatham County is the only closed case.

Seemingly unrelated to the whirlwind of alleged criminal offenses is the State Bar of Georgia’s flag on Cerbone. As of September 6, 2022, Cerbone’s law license dues were unpaid, therefore making him ineligible to practice in Georgia.

According to documents filed in Chatham County, though, Cerbone was accepting new clients at least through the third week of August 2022.

In fact, it was a perturbed quasi-client of Cerbone’s that prompted TGV’s investigation into his offenses. The individual reportedly retained Cerbone for a criminal matter, but failed to return emails or phone calls about upcoming court dates. More recently, the number listed on Cerbone’s website directed straight to voicemail, which reflected a personal message from Cerbone. The individual wanted to retain new legal counsel, but had no funds to hire a second attorney.

As it turned out, the lack of correspondence by Cerbone was due to his own incarceration in the Bryan County Jail. But more than one person has called Cerbone’s legal representation into question.

In September 2021, a former client of Cerbone filed suit in Chatham County Magistrate Court over his failure to appear on her behalf despite her payments to him exceeding $5,000. Cerbone disputed the claims and called the former client a liar in a handwritten proceeding. He also asked for damages in the amount of $7,000. Ultimately, Judge Michael Barker ruled in the former client’s favor.

Cerbone also filed a handwritten note as to why he was not present for one of his own hearings.

Cerbone, however, dismissed the suit a little more than one month later.