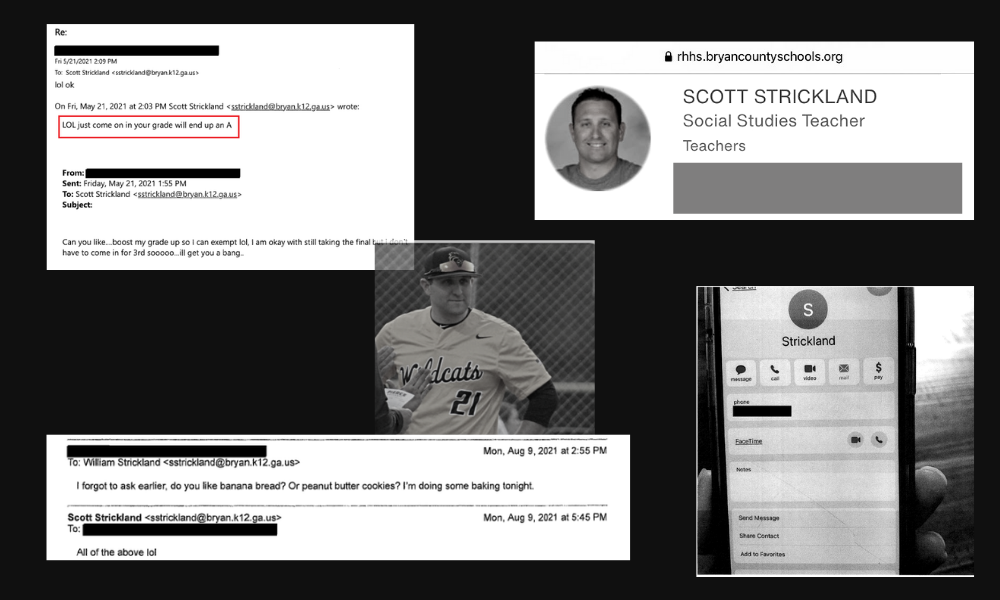 This article contains a number of PDF files, some of which are large and may take a few moments to load.

The former Richmond Hill High School teacher and coach who resigned from his post earlier this month was having private text and email conversations with students and agreed to change the End of Course test grade of a female student, public records show.

The incidents, which are still under investigation by the Bryan County School System, are documented in the 2020-2021 and 2021-2022 school years and follow a forensic review of electronic devices.

The Georgia Virtue filed an Open Records Act request with the school system in seeking the personnel file of Scott Strickland, records related to the conclusion of his employment, the Personnel Handbook, and any actions taken by the school system to file paperwork with the Georgia Professional Standards Commission, which governs teaching certificates, as required by law.

Editor’s Note: A column appeared on TGV on Thursday, September 16, 2021 with regard to a seemingly difficult process to obtain records from the Bryan County School System. Once Assistant Superintendent Jason Rogers was in possession of the request, the records were promptly provided.

Strickland’s personnel file showed nothing related to the allegations in August 2021, however, three records of write-ups for various matters exist, including:

Each write-up was signed and dated by the corresponding principal as well as by Strickland. His personnel file was otherwise stacked with positive annual evaluations and his job application from 2013.

The investigation by school system administrators was launched based on a report that Strickland and a 17-year-old female were inappropriately “sexting.” A parent made a report to a Richmond Hill High School teacher and, as a mandatory reporter, that teacher contacted the school principal. The principal subsequently followed the appropriate protocols for investigating the allegations.

Included in the records provided by the Bryan County School System was a timeline of events which reportedly began on August 27, 2021. The timeline indicates that the principal was notified by a teacher on Friday, August 27, 2021 of concerns regarding a staff member of RHHS. Principal Bivins Miller contacted at least one parent and the Board Office, and was then directed by Superintendent Paul Brooksher to contact the Technology Director to get access to Strickland’s email account.

He then said, “To my knowledge, I have never sent a text to a student that is underage. I mean, I’ve used Remind to send messages when they are out about schoolwork but never anything else.” Throughout the meeting, Strickland denied any type of inappropriate relationship with a student and, at one point, asked who else was aware of the inquiry/investigation.

A series of questions by Debi McNeal were posed, prompting Strickland to ask, “Are you telling me this was today or like this year or like the last few years? I’m so confused. I don’t even know what to do, what am I going to tell people?”

Strickland signed documentation attesting that he was aware of a report being filed, but that he had no knowledge of the accusations. He was placed on administrative leave and asked to leave until the investigation was completed. The School Resource Officer was contacted, he also spoke with Strickland, and a RHPD report was made.

In the days that followed, a forensic review of electronic devices was conducted by another party and the investigation by SRO Littlejohn continued.

The emails provided in the records request are redacted to protect the student names and emails.

Discussion in the emails, however, includes:

A July 1, 2021 email shows Savannah Bananas tickets sent to Strickland’s school email and then forwarded to a student.

Additionally, on August 11, 2021, a student emailed and asked when he held tutorials, to which Strickland replied “6am.”

On May 21, 2021, another email from a student shows a request for a boosted grade. “ill get you a bang,” her email wrote. “LOL just come on in your grade will end up an A,” Strickland replied.

Statement from Student Attesting to Texting

Second Meeting with Administrators and Strickland

At 6:30 a.m. on September 7, 2021, another meeting with Strickland and administrators occurred. At that time, Debi McNeal confronted Strickland about his changing of an End of Course test gradeof a student. Strickland said he changed the grade but ‘not on purpose.’

When asked if he believed that texting students was a good practice, Strickland said it was an accessibility thing. “I don’t believe it was inappropriate.”

Text messages are not available due to them being on Strickland’s personal phone, which is not provided by or recorded by the Bryan County School System.

“What are my ethics violations?” Strickland asked.

McNeal said, “Testing, dishonesty, and inappropriate communications with students.” McNeal then told Strickland his options were resignation or termination and then said, “My investigation ends when resignation occurs.”

Strickland then said a resignation was likely forthcoming, but he needed to speak with his PAGE representative on the ethics violations. He also asked what would come of his teaching certificate, to which McNeal said would be up to Georgia PSC.

Strickland submitted his resignation shortly thereafter – at 10:00 a.m. and it was formally accepted by the Board of Education two days later. The timeline also reads that the RHHS administration received additional information on September 10, 2021.

The Georgia Virtue requested the documents as they were sent to Georgia PSC, however, Bryan County Schools said in an email Tuesday morning that the correspondence from the District to Georgia PSC is not yet complete. It is expected to be provided once the documentation has been completed and sent to the state.

Under Georgia law in O.C.G.A. §19-7-5, a statute that establishes a protocol for mandatory reporting for the purposes of preventing abuse and “to protect and enhance the welfare of children,” child abuse applies to sexual abuse of a child and sexual exploitation of a child. Mandated reporters are required to notify the person in charge of their respective facility and the notified person is to report or cause a report to be made. As it pertains to Richmond Hill High School, this applies to all school teachers and school administrators. Failing to meet these standards is a misdemeanor offense and

You can view a complete list of who is a mandatory reporter here.

In Georgia, the age of consent for sexual intercourse and other activities is 16, however, consent is irrelevant and cannot be offered when one person is in a supervisory role, such as a teacher. (See O.C.G.A. § 16-6-5.1) In June 2019, the Georgia Supreme Court said consent could be offered as a defense in these types of cases, prompting the Georgia General Assembly to pass more restrictive legislation prohibiting the defense.

Additionally, the Georgia Public Standards Commission, which governs teaching certificates, requires that any allegations of misconduct and violations of the ethical standards be reported to the state.

A report published in 2018 suggested that teachers who have inappropriate relationships with students are more common than most people know because there is no state recordkeeping for prosecutions, only certification revocation, and that isn’t listed in a public database.

From 2011 to 2016, approximately 200 state investigations led to the revocation of teaching licenses for individuals in Georgia alone – an average of 33 teachers per year. But in more recent years, those numbers have ticked up to four or five per month, with annual numbers in the 40s and 50s, according to the Georgia PSC.

“The evidence was often too weak for the criminal courts, with no witness beyond the student in the relationship, who was sometimes uncooperative…Bernier suspects many cases go unreported, either because students want to protect teachers or because teachers pressure them to keep silent. Many also think no one would believe them, she said…Even teachers who are disciplined locally may escape serious sanction and get passed along to another school. Georgia has no central screening process for teachers, leaving that to school districts.”

More often than not, teachers, if disciplined at all, simply relocate to another district in the state and, particularly in times when districts are struggling to find teachers, a ‘resignation’ from another school system is hardly a red flag.