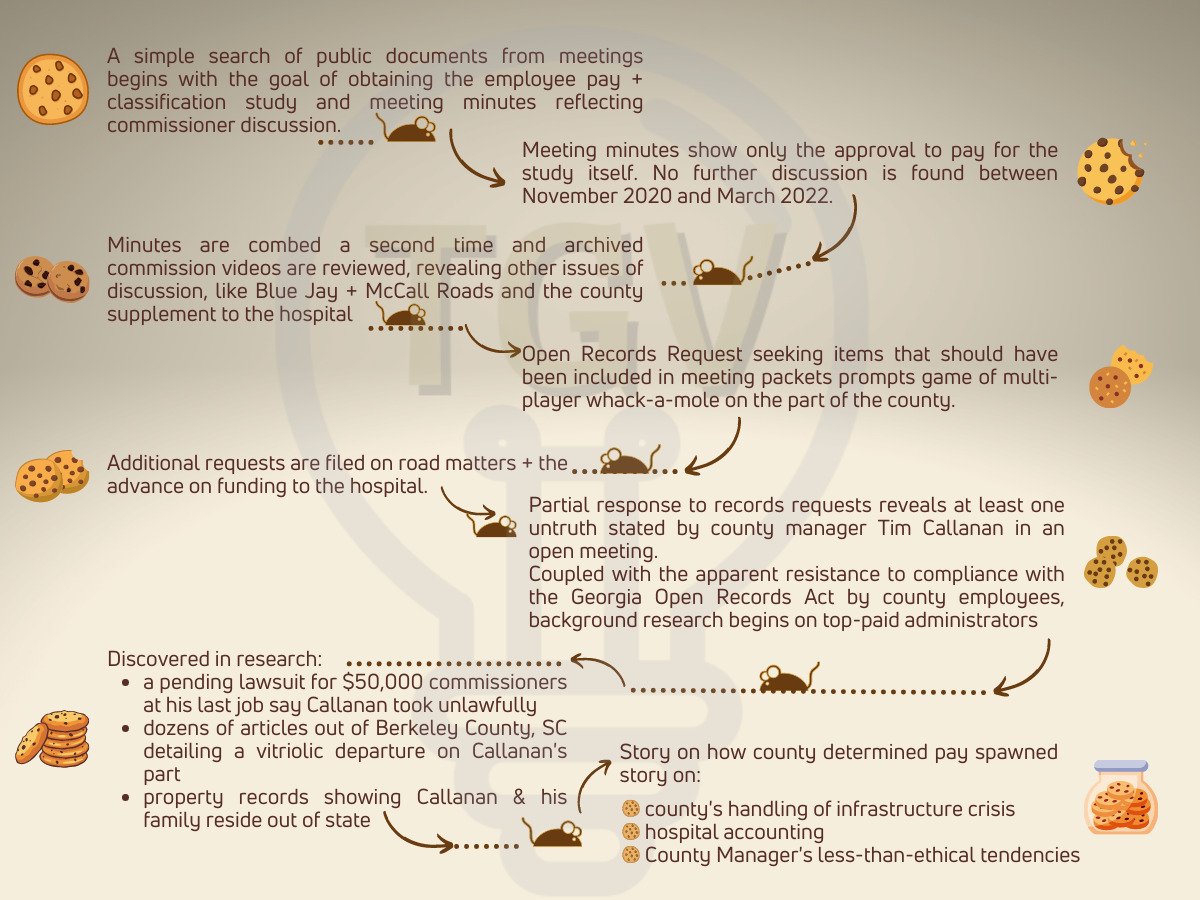 The following article is an opinion piece and reflects the views of only the author and not those of TheGeorgiaVirtue.

Surely you have read the children’s book “If You Give a Mouse a Cookie.” If you haven’t, you’re missing out on a classic that is both educational and entertaining for children and adults. The story simply explains the concept of a ‘slippery slope.’

If you give a mouse a cookie…then he will want some milk. To drink the milk…he’ll desire a straw…and so on…By the time you get to the end, you ask yourself if it was really worth it to give the mouse the cookie in the first place.

I recently starred as the mouse with the cookie in the Effingham County version of the story. My version, however, does not end with a mouse with a tummy full of cookies and milk. Instead, it highlights the agony local governments subject themselves to in their adherence to secrecy and operating outside the public eye.

If you start looking for one thing in government…

It all started with an innocent quest to examine the pay study conducted in Effingham County in 2020 and 2021. Pay studies, upon completion, are usually published online – either in meeting minutes or agenda packets – because they’re presented by the company conducting the study with in-depth details. It’s not uncommon for there to be considerable scrutiny before elected officials adopt recommendations. It makes sense: while the studies don’t include sensitive information, like specific employee names and salaries, they do assess and alter the entire structure of how a city or county pays employees. There’s a reason for it, but it’s important that elected officials understand the reason behind the overhaul.

My experience in covering local governments has taught me that this is highly unusual. Elected officials don’t normally spend $18,500 for a study only to never discuss it. Curiosity alone will usually spur discussion by at least one commissioner, so it raised some flags for me and I decided to dig a little deeper.

…so you’ll ask for some records…

I filed an Open Records Request for the pay study and decided to comb through the minutes more thoroughly in the meantime. I also watched a handful of commission meetings and took some notes.

…but they won’t be what you need…

Upon receiving part of my Open Records Request, I inadvertently learned that the county manager, Tim Callanan, had been dishonest about the timing of the compensation report and off of what information he was working when he presented the budget to commissioners. The records provided to me by county employees were wrong on numerous occasions, seemingly deliberately so, prompting an expose on how intentional the stonewalling appeared to be.

The perusal of the meetings showed disingenuous statements by Callanan on a handful of occasions, illustrated how commissioners handle infrastructure crises, and how the hospital sought a ‘front’ on the county’s infusion of tax dollars to supplement the hospital. First the story grew legs, now it was producing offspring. One of those children? Mr. Callanan’s integrity.

…so you’ll go another direction…

In conducting some independent research, I learned that Mr. Callanan departed from Berkeley County on less than favorable terms. ‘Amid a scandal’ is the most accurate way to describe how he left the job of Deputy Supervisor in the county in which he once served as an elected official. (That’s another red flag.) He’s also still – two years later – in the middle of a lawsuit because the Berkeley County councilors assert that Callanan took a $49,900 severance when he left his post. Surely, like me, you’ve never heard of an individual landing a $49,900 severance in a government job, especially with just shy of four years worth of tenure.

Naturally, this spawned even more questions, prompting me to locate the lawsuit itself (found here) and to track it on the Berkeley County Clerk of Court’s website. Records suggest that the amount of $49,900 was deliberate to skirt local procurement ordinances which regulate spending over $50,000.

A jury trial will settle the mind boggling matter this summer and while Callanan filed a countersuit alleging he is the target of Berkeley County because he’s actually a ‘whistleblower,’ little evidence has been produced to substantiate such a claim. It will undoubtedly be something worth following.

But then you’ll remember why you started…

Meanwhile, back at the ranch, where they corral the public records, county employees are partaking in their locally-initiated filibuster. Refusal to clarify what time period the records apply to, refusal to answer how the county maintains records, refusal to assist in narrowing the request to save everyone time. The public servants provide unnamed documents in an effort to confuse. Established as the desired norm is secrecy as meeting agendas mention critical and high-dollar subject matters but include no accompanying documents for the public to review.

The obvious desire by employees is that the multi-player game of whack-a-mole will prompt the public or media to give up and stop asking, but the bad actors fuel the opposite. The series of red flags only prompt more questions, more probing, and more requests for public records. Every refusal gives cause for another inquiry.

The story was how the county managed to make their employee salaries competitive following an in-depth analysis. The story now is five-fold:

And to think, all of this could have – and would have – been avoided if commissioners voted on the pay study in an open meeting and the county published it for public review.

In this article:Effingham County, Opinion