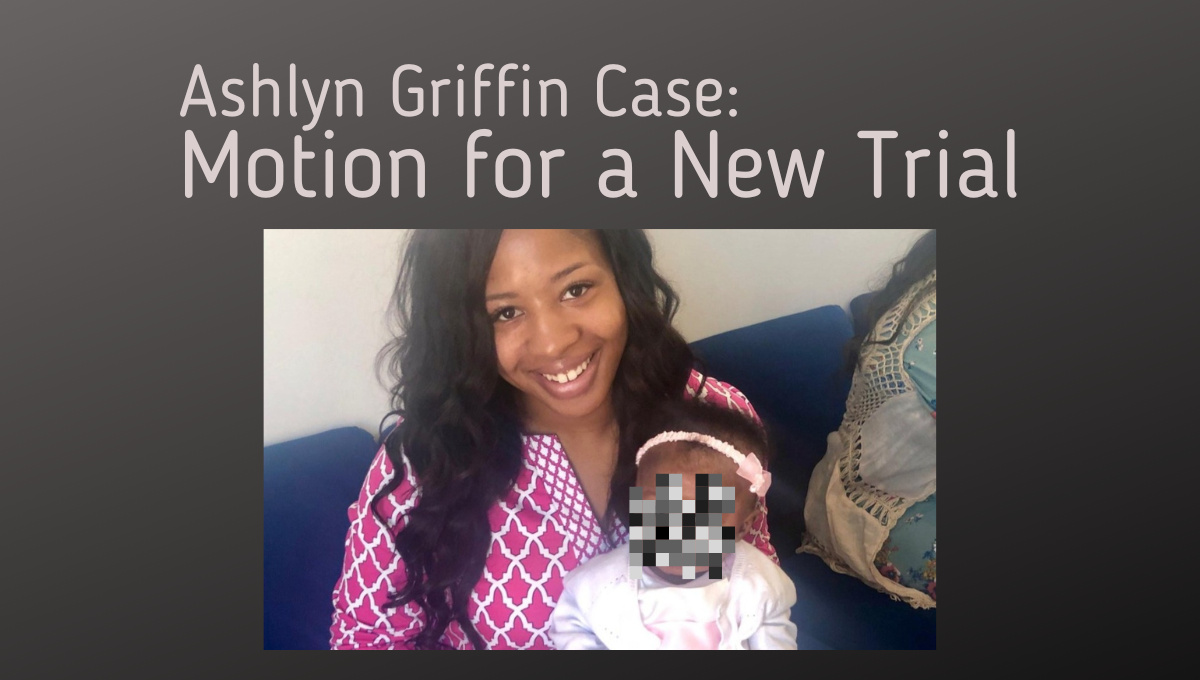 The domestic violence victim sentenced to prison for defending herself against her abuser is seeking a new trial in Bulloch County.

In February 2022, a jury found Griffin not guilty of Felony Murder, but guilty of one count of Aggravated Assault and one count of Possession of a Firearm During the Commission of a Crime. Griffin shot and killed her boyfriend, Brandon McCray, during a dispute at their home in June 2020. She was arrested the same day by the Statesboro Police Department after what the agency referred to as ‘a thorough investigation.’ Detectives claimed that Griffin fired two shots, within seconds of each other, but only one the first shot was justified.

The case garnered considerable attention after TheGeorgiaVirtue.com published details of the prosecution of Brandon McCray two years prior for Aggravated Assault against Ashlyn Griffin. He pleaded guilty in a negotiated plea with the state, which was represented by Chief ADA Daphne Totten, who is now the elected District Attorney.

During the trial, ADA Barclay Black suggested that the abuse by McCray, which put Griffin in the hospital in 2018 and nearly cost her a pregnancy due to pelvic hemorrhaging, was ‘not that bad.’ Court documents from McCray’s guilty plea indicate he choked and strangled Griffin before kicking her repeatedly in the stomach. On cross examination of Griffin at trial, Black asked her why she didn’t just tell McCray to ‘get away’ while he assaulted her on the day of the shooting in 2020.

The Felony Murder component of the state’s case crumbled during trial when Griffin’s attorney asked the GBI Crime Lab’s Medical Examiner if, based on the autopsy she conducted, McCray had to be upside down or ‘in a headstand’ in order for the state’s suggested bullet trajectories to match the entry and exit wounds on McCray.’ The M.E. replied with a simple ‘Yes.’

But the inconsistent verdict returned by the jury indicated they believed Griffin was not guilty of causing the death of McCray while committing a felony act (Felony Murder), but was guilty of the felonious act of Aggravated Assault. While the state argued the second bullet killed McCray, jurors effectively concluded that the first shot killed McCray and that was justified, but the second shot was assault. Ironically, the trial concluded without any evidence being presented to indicate for certain which bullet -if only one – actually killed McCray.

During the sentencing hearing, Judge Gates Peed denied the defense’s request for a directed verdict, or to act as “the 13th juror” and override the jury’s conclusions. Subsequently, Ashlyn Griffin was sentenced to serve ten years in prison followed by fifteen years on probation.

Griffin’s trial attorney, Mitch Warnock of Dublin, filed a Motion for a New Trial immediately following her conviction. Attorney Andrew Fleischman out of Ross & Pines, LLC in Atlanta is now handling the appeal for Griffin.

The basis of the appeal includes that:

The procedure for seeking a new trial requires Griffin to make the motion for a new trial before the same judge that ruled against her in the immunity hearing and sentenced her to prison. If the Motion for a new trial is granted, Griffin cannot be tried again for the Felony Murder charge, only the Aggravated Assault and Possession of a Firearm During the Commission of a Felony charges.

A court date was initially scheduled for August 24, however, the appellate attorney sought a 30-day continuance for the opportunity for additional evaluation of Griffin.

An appeal of the conviction has simultaneously been filed with the Georgia Court of Appeals.