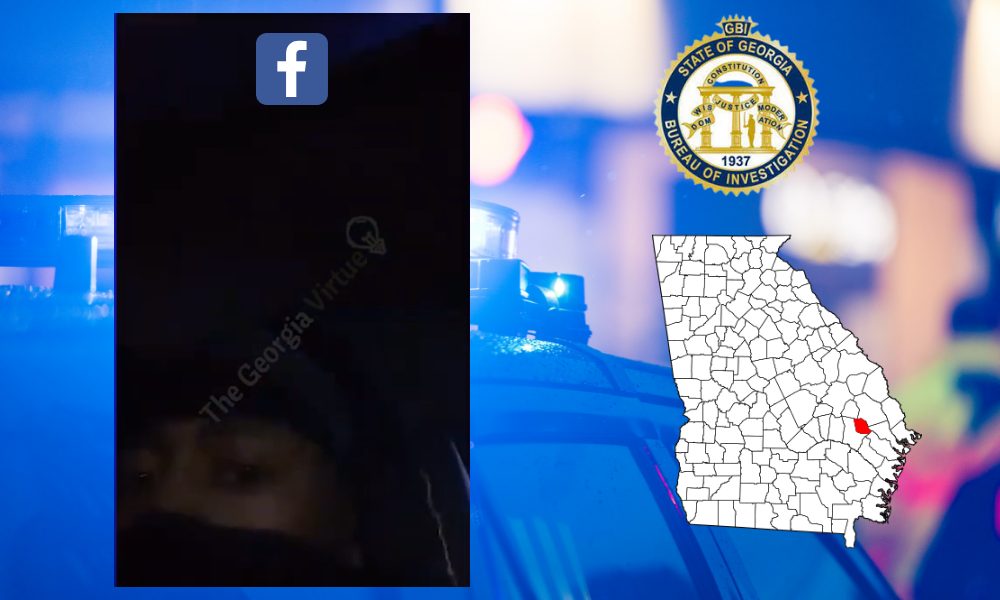 WARNING: The video contains explicit language, references to and audio of violence, and other graphic content. It is not suitable for children.

A suspect who was fleeing from law enforcement on Friday evening took to ‘Facebook Live’ as he led a Trooper with the Georgia State Patrol, Evans County deputies, and other authorities on a high speed chase and fired shots from his moving vehicle.

The driver reportedly refused to stop at a safety checkpoint at Highway 129 and Highway 169 in Evans County. He drove south on Highway 301 at upwards of 110 mph before reaching the city limits of Claxton. The chase continued at approximately 90mph, according to the Georgia State Patrol, and ultimately ended in Hagan.

The video was posted from the Facebook account ‘Scrapboyz Fukyofeelings RJ’ and lasts approximately one hour and forty-seven minutes, though the crux of the video content is in the first several minutes.

The video begins with the driver talking to the Facebook audience as blue lights appear behind him. The man says he didn’t do anything but he’s “not going out like that.” Throughout the audio, the seatbelt indicator and the sound of the tires hitting the rumble strip can be heard.

At the 1:10 mark, the driver’s tone changes and he says “I said this was how I was going to go out.” Just after the 2:50 mark, sirens are activated behind the vehicle as a bunch of commotion is heard inside the suspect’s vehicle. At 3:20, there are multiple sirens heard, tires squeal, and the vehicle is heard accelerating substantially.

(Story continues below)
WARNING: The video contains explicit language, references to and audio of violence, and other graphic content. It is not suitable for children.

WARNING: The video contains explicit language, references to and audio of violence, and other graphic content. It is not suitable for children. A suspect who…

Though the Facebook account is listed with a fake name, the account’s public posts show Secretary of State filings for an LLC organized in 2020 – Nightshiftnation Promo Streetteam LLC. The now-dissolved LLC is listed on the Secretary of State’s website with a registered agent and organizer named Ramone Dwight with ties to both Chatham County and Jonesboro in Clayton County. His Facebook profile also shows he is 29 years old.

As of Saturday afternoon, Facebook had placed a ‘sensitive content’ disclaimer on the video but had not removed it. Evans County Sheriff Mac Edwards confirmed late Friday evening that the chase did end in Evans County and that the Georgia Bureau of Investigation is investigating. No additional information has been released.

No law enforcement officials were seriously injured during the chase.

This story is not related to the incident in Alamo, Ga early Saturday morning, in which Damien Anthony Ferguson reportedly shot and killed Alamo Police Officer Dylan Harrison.