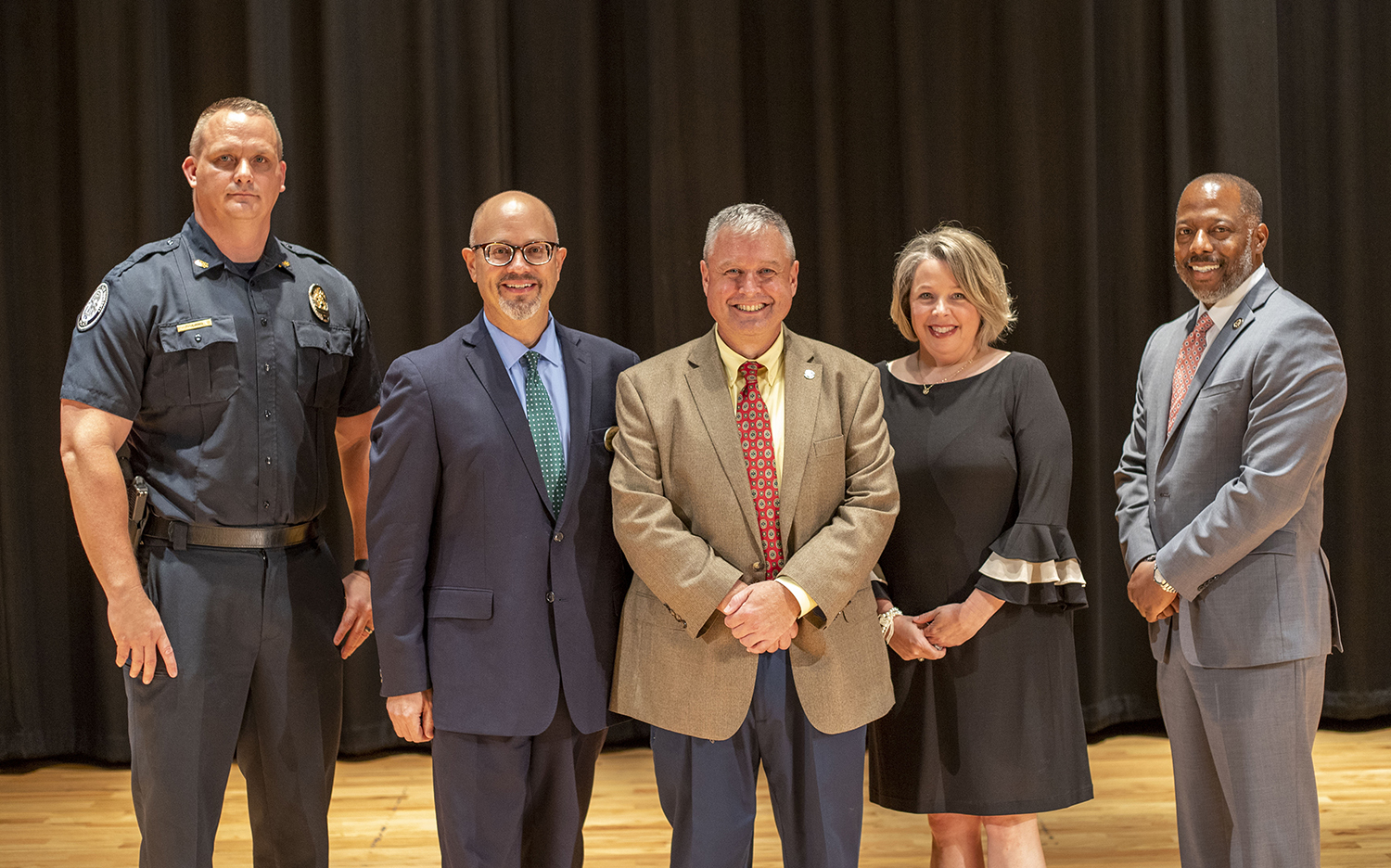 East Georgia State College (EGSC) hosted a swearing-in ceremony Monday, August 8, for Trey Drawdy who has been named the new EGSC Chief of Police and will serve the campus community. The University System of Georgia (USG) Chief of Safety and Security, Chief Mike Coverson, attended the event to administer the Oath of Office.

“I am excited to join the East Georgia State College family and to be a part of an environment which is truly student focused. The college experience is about helping students explore and blaze their own pathways to a fulfilling and prosperous future. I’m eager to do my part in helping, supporting, and encouraging our students through various public safety initiatives and services,” said Drawdy.

Drawdy is originally from Southeast Georgia and has over 25 years of law enforcement and higher education administrative experience.

“Trey is a law enforcement professional with decades of experience in this area and I could not be more pleased that he has chosen to join us here at East Georgia State College,” said Dr. David Schecter, President of EGSC.

Drawdy began his career in 1994 with the Glynn County Police Department as a patrol officer and later served as an investigator. During his time with the agency, Drawdy was awarded the department’s distinguished service medal and received the Optimist International Respect for Law Award.

To expand his criminal justice knowledge base, he accepted an appointment with the Juvenile Court of Glynn County and served in various capacities to include intake, diversion, probation, and represented the court as an inter-agency trainer.  Additionally, he served as a school resource officer with the Glynn County Schools Police and oversaw training for the agency.

In 2004, Drawdy earned a graduate degree and became a criminal justice faculty member with Chattahoochee Technical College. His primary focus was on mentoring first-generation college students and public safety professionals seeking career enhancement through education. As a department chair, he developed the Law Enforcement Accelerated Academic Program (LEAAP), which offered a combination of online, hybrid, and condensed in-person classes offered on weekends. His efforts led to receiving the Rick Perkins Award for Excellence in Technical Instruction at the institutional level.

In 2009 he became director of the Reinhardt University Public Safety Institute, which is a Georgia P.O.S.T. certified law enforcement academy in the metro-Atlanta area. The Institute was conceived to serve the needs of aspiring and veteran law enforcement officers through a combination of training and education. Drawdy found the position to be unique because it required a merging of academic administration with law enforcement managerial responsibilities.

He was initially tasked with overseeing the basic training of new police officers. Under his leadership, programming was expanded to include advanced and specialized training for veteran law enforcement officers. As the Institute grew and expanded, Drawdy was named interim dean of the School of Professional Studies and was promoted to the rank of captain within the Reinhardt University Department of Public Safety.

Drawdy retired from Reinhardt University in 2022 after having graduated over 400 newly minted Georgia police officers. Additionally, he is proud to have played a role in the development of veteran officers who have gone on to serve across Georgia as police chiefs, command staff members, and supervisors.

Drawdy is a member of the Georgia Association of Chiefs of Police and completed the Chief Executive Training program in 2020. He holds an associate degree from the College of Coastal Georgia, a baccalaureate degree from Armstrong State University, and a Master of Education from Troy University. Additionally, he is certified as a senior instructor through the Georgia P.O.S.T. Council and is a U.S. Marine Corps veteran.

Trey’s wife of 16 years, Brook, is a native of Bulloch County and is an East Georgia State College alumnus. In their free time, the couple enjoys attending youth basketball tournaments with their 13-year-old son, Lee. Trey also enjoys camping and giving of his time through service as an adult volunteer leader with Georgia 4-H.