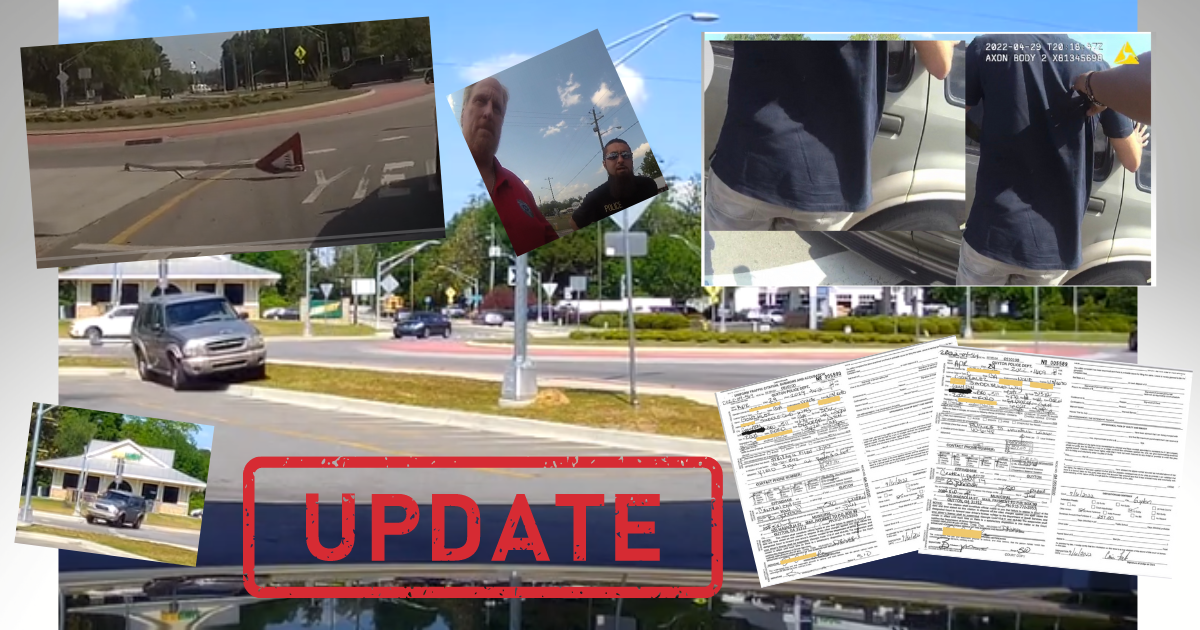 In May 2022, TGV published an article which detailed the 911 call of an off-duty Effingham County Sheriff’s deputy who followed a suspected impaired driver for almost ten minutes as the driver left the roadway several times, nearly collided with oncoming traffic, and ultimately took out a sign in a roundabout before ramping over the curb into a crowded grocery store parking lot.

That driver was headed for the exit of the grocery store parking lot when he was cornered by law enforcement in Guyton and detained for a subsequent investigation.

Despite the deputy’s statements, the crash captured on dash camera of a grocery store customer, and seemingly enough evidence to arrest the driver for a number of infractions, the Guyton Police Department instead opted to offer a “courtesy ride” across the county to the driver’s residence.

Additional information on the case was not available when the story was first published as the two traffic citations for Striking a Fixed Object and Failure to Maintain Lane had not yet been adjudicated in court.

On July 6, the driver pleaded guilty to both violations and paid $547 in fines.

Body camera footage was then obtained under the Georgia Open Records Act. Bewilderingly, it poses more questions than it provides answers.

While three officers and the chief responded to the scene, only Officer Brown and Officer Johnson utilize body-worn cameras.

The footage begins as the driver appears to struggle to get the vehicle in park. During a pat down, the driver’s pants are soaked on the front and back, which prompts the officer to ask him if he ‘peed himself.’

The driver told the officer that it was just water from his cup, but the cup he referenced is shown in body cam footage, still with contents in it and with a lid. A few minutes later, the driver told officers that his cup contained water and pre-workout. Naming a brand, the driver referenced a pre-workout that is sold in a variety of bright colors, meaning, a colorful stain would likely appear if spilled on khaki color pants.

The driver told Brown on at least seven occasions during the stop that he was ‘tired.’  Brown told the driver he did not understand how being tired would prompt him to come around the roundabout as he did and take out the yield sign. He also explained that an off-duty deputy had been following him.

“Are you aware that you took out that sign?” Officer Johnson can be heard asking.

“I mean, I am now,” the driver responded.

Different Stories About Where He Was Coming From

The driver stated he was coming from work during hours that would be considered a third shift at UPS but was wearing khakis, a polo shirt, and boat shoes.

He stated he was coming from UPS on ‘New Sunny Drive.’ There is no ‘New Sunny Drive’ location for UPS, however, there is a customer service center on Sonny Perdue Drive in Savannah. That location operates Monday through Friday from 9:00 a.m. to 8:00 p.m. and is closed from 12:00 to 4:30 p.m. daily.

Different Stories About Where He Was Going

The driver told the officer he was on his way home and was really tired because he started work at 2:45 a.m. “I’m on my way home,” he stated repeatedly. Four minutes later, the driver told officers he was just going home, but that his navigation was set to go to a house he’s going to look at purchasing.

Later in the conversation, the driver told officers he didn’t know the area because he and his wife “just moved here,” but when Chief Breletic asked him how far away from the current location he lived, the driver answered ‘10 miles.’ Property records indicate the referenced home was purchased five months prior.

A few minutes later, the driver was asked again by the Chief Breletic about how far away he lives to which he replied, “I have my navigation set. So long story short, we’re separated. I’m shopping for a home and I literally have it set to the new address that I plan on checking out tomorrow just to take a peek at it…but we live on Saddle Club Way and that’s where I live, that’s why I’m in this area. Same town, across town kind of thing.”

Breletic: Are you residing there or have you stepped out?
Driver: “Currently, I am there.”
Breletic: “So you have keys to the residence, etcetera?”
Driver: “Yes sir.”

After Johnson conducted a search of the vehicle, he returns to his own vehicle to run the driver’s license. He’s heard telling someone not in the camera view, “He ain’t been drinkin or nuttin. I don’t think he been drinkin or nuttin. I think he’s been worked a lot, he said he dozed off, and I checked the truck, no smellin.” He then says he’s going to cite the driver for Reckless Driving because he took out the sign.

Shortly after, Johnson pulls Breletic over to the side to share his thoughts, saying he believes the driver.

Eventually, Officer Johnson disclosed to the driver that he is not going to take him to jail, but he would issue citations and he can’t drive the car anymore. “Is it possible you can pull somewhere and take you a nap?” The driver replied by asking if he can take an Uber. Johnson replied, “That’s fine. If you wanna do that, that’s fine. I just can’t let you drive.”

Chief Breletic told the driver that officers will take him to his residence which is ten minutes away.

“Would that help you out sir?...We can do a courtesy ride to assist you.” Breletic explains, however, that he doesn’t want the driver to return to the house and a domestic issue ensue because of the separation of he and his wife.

“Not at all,” the driver replies.
“Fantastic,” Breletic says.

Before he leaves, Officer Brown tells the driver that he needs to understand where they were coming from.

“We also got to take in all the factors. We got somebody whose known to see drunk drivers (referencing the off-duty ECSO deputy) on a daily basis see you coming down the road, swerving swerving swerving, ya know? So they call us and now we’re concerned because that puts the public at risk so we come, see you, first thing we see you smack the yield sign, so in our eyes, it’s like UH-OH!”

Ultimately, the driver was cited for Striking a Fixed Object and Failure to Maintain Lane, not Reckless Driving. Only Officer Brown was aware of the soaked pants. No field sobriety tests were performed and while the driver was asked if he had consumed any alcohol or had taken ‘any medication,’ he wasn’t asked about other substances or medication not prescribed to him, as is the standard in such stops.

As it turns out, Guyton PD does not provide training for its officers on Field Sobriety Testing beyond what is offered in basic training when an officer becomes certified. That may offer some insight as to why, despite the surge in calls for service, Guyton PD has no arrests for DUI in the last several months.

As the traffic stop concluded, the vehicle was still blocking the Ken’s IGA entrance/exit. Officer Brown asked if he should move the car to a parking spot, to which Johnson replied, “No, let him move it.” Brown went on to take photos of the vehicle and the sign before his footage ended at 20:35 or 8:35 p.m, though in real time, it was only approximately 4:30 p.m.

In Officer Johnson’s video, he returned to his vehicle to draft the citations. Breletic approached the car to speak to him quietly, at which time his body camera footage, as provided in the public records request, cuts off at the 20:30:42 mark. Johnson’s camera cutoff time stamp is five minutes before the cutoff time on Brown’s body cam footage, in which Breletic can be seen leaving.

The City has not provided an explanation as to why the body camera footage was not complete. The Guyton Police Department has operated for over two years without a policy manual to govern officer conduct.